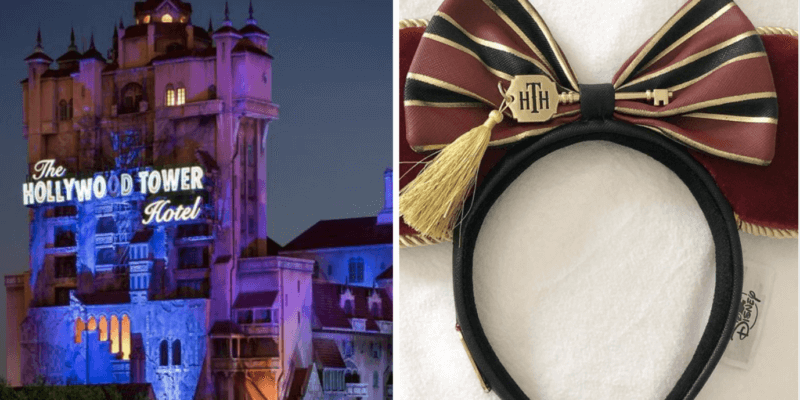 Most Disney Parks fans have strong opinions about The Twilight Zone Tower of Terror at Disney’s Hollywood Studios. It’s the type of Disney theme park attraction people either love or hate, depending on how much they enjoy free-falling from the 13th story of an abandoned building.

I happen to fall into the former category and can’t get enough Tower of Terror in my life. If you’re anything like me, you’re going to want to pop over to Hollywood Studios as soon as possible to snag these Tower of Terror Minnie ears right away!

Instagram user @sorcerersnacks shared a gorgeous photo of her new Disney park Minnie Mouse ears this afternoon with the caption:

I know it’s not food, but I had to share these beauties. The second I got off of Tower of Terror this morning I KNEW I had to have these!! My favorite attraction in the form of Minnie ears? I’m in love!⚡️⠀

They also have a black and maroon striped Minnie bow with a Hollywood Tower Hotel room key in the center.

Since the Disneyland version of Tower of Terror was re-themed to feature Guardians of the Galaxy, the Disney World Tower of Terror is the only remaining Twilight Zone themed ride in the domestic Disney Parks. Due to this, it is likely that these new Minnie Mouse ears will be a Walt Disney World Resort exclusive.

Keep checking shopDisney.com, however, as park exclusive merchandise is frequently listed there after it has been around for a period of time.

Are you planning to buy this Tower of Terror Minnie Mouse ear headband?

Book your next trip to Disney’s Hollywood Studios with Academy Travel!