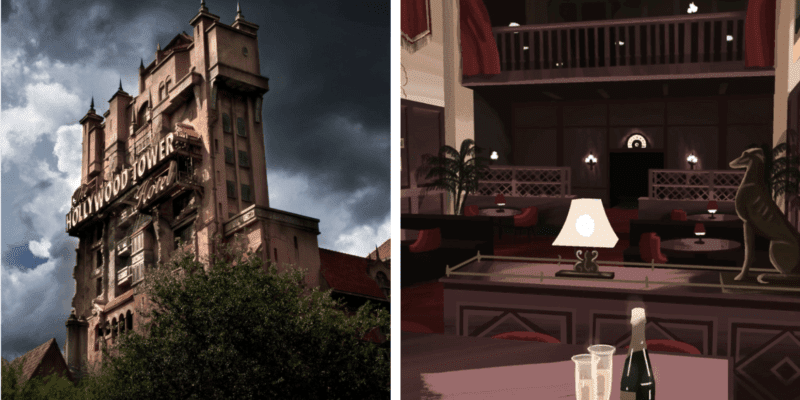 Now, one Disney fan has taken the idea of Trader Sam’s one step further and designed concept art for a bar, called The Tip Top Club, inside of the Hollywood Tower Hotel Tower of Terror. As a lifelong fan of The Twilight Zone Tower of Terror, I would be first in line if this Tower of Terror lounge ever became a reality!

Reddit user RobYeo shared a video of his Tip Top Club concept art yesterday and you can color me impressed. Everything about the idea fits with the existing theming of Tower of Terror at Disney’s Hollywood Studios theme park in Orlando.

The art deco decor in the concept art for the Tip Top Club fits with the Hollywood Tower Hotel’s Golden Age of Hollywood aesthetic. One of our favorite details is the fact that all roads lead to the elevator doors, taking Guests straight to the 13th floor.

RobYeo’s Tower of Terror bar concept video, which includes creepy flickering lights that would be part of the experience, was incredibly popular among other Reddit users.

“Wow! Happily surprised to see concept art in this subreddit! I’ll have to make some as well, this is my favorite Disney attraction! Really well done on both idea and presentation! Love how loyal your aesthetic is to the attraction itself. I could honestly see this being a huge hit for WDW, especially since there are so many folks who cling to the Tower of Terror after Disneyland changed theirs to a Guardians theme. Amazing work! Following for sure!”

The full video is available below:

We’re 100% onboard with the Tip Top bar and lounge becoming a reality! Tell us your thoughts on a themed Tower of Terror bar in the comments.