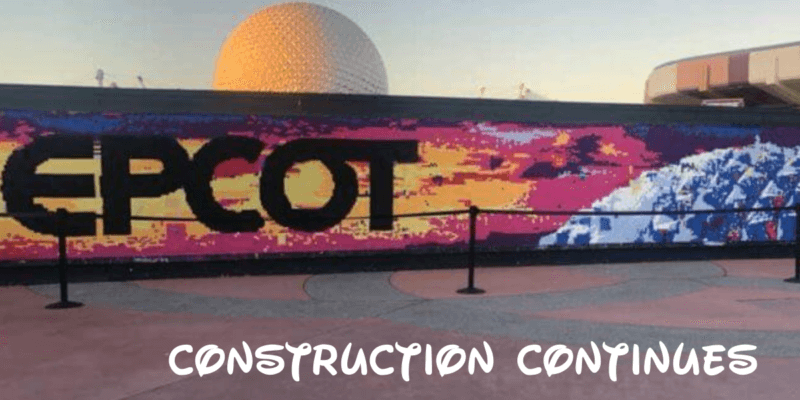 If you’re excited for EPCOT’s transformation (or you just want to know more about it), then we’ve got some news for you. Today, Disney filed a new permit that indicates even more work is taking place within the second Disney World theme park.

A new permit fled by Walt Disney Imagineering indicates that work is continuing in EPCOT. This time, we can see that some small changes are going to take place in an area near Spaceship Earth, the theme park icon and fan-favorite attraction.

If you recall, there were originally plans for a Spaceship Earth overhaul at EPCOT. Those plans were later put on hold, and now Guests are able to experience the attraction as we don’t know when the Spaceship Earth transformation will take place, after all. However, this permit shows that an area near Spaceship Earth will be getting transformed one way or another.

The permit — filed on July 30, 2020 — states that Walt Disney Imagineering will “install east support facility graphics” over by Spaceship Earth. At this time, we’re not exactly sure what that means. However, with everything Disney has in mind for EPCOT, we’re sure this change will be seen by Guests soon enough. If we’re lucky, maybe this means we’ll get another photo-worthy area!

You can click here to see the permit for yourself.

EPCOT is undergoing a huge transformation. Much of the work was announced at D23 Expo last summer, where we learned the news of several new projects Disney Parks had planned for EPCOT.

Since then, projects like the Spaceship Earth overhaul and the Mary Poppins attraction were put on hold. However, exciting new additions like the Guardians of the Galaxy: Cosmic Rewind roller coaster are still being brought to life, as construction moves forward.

We also learned at D23 Expo that Disney plans to transform EPCOT’s Future World into three separate lands. Many believe this is one of the changes that will bring the theme park closer to Walt Disney’s original vision.

No matter what comes to life with the EPCOT transformation, we hope much of it will be complete before the celebration of Walt Disney World Resort’ 50th anniversary.

Remember: Disney World is currently accepting new vacation bookings for 2020 and 2021. You don’t have to miss out on all the fun, and EPCOT is still open during construction. Click here to book your next trip to the Most Magical Place on Earth!