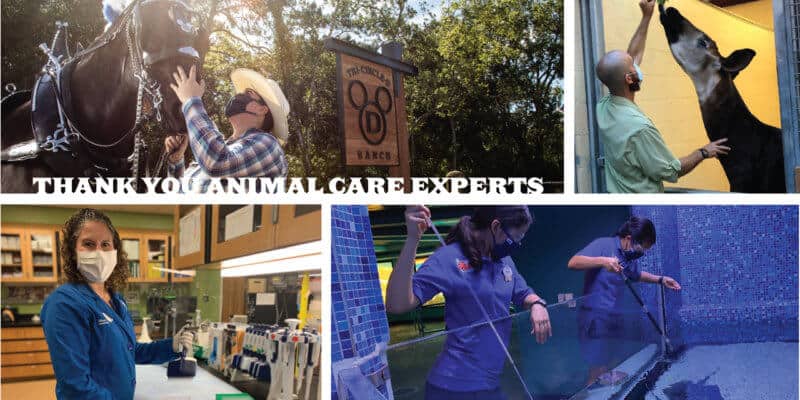 Disney’s Animal Kingdom at the Walt Disney World Resort reopened on July 11, and there’s a group of workers that we really need to thank for that.

Yes, there are Cast Members that worked hard with implementing the health and safety protocols that Walt Disney World now has, and we really need to thank those workers too, but they aren’t the group of worker we’re talking about now.  Over the past four months, even when the Disney Parks were closed, there has been an essential group to care for the stars of Disney’s Animal Kingdom, the Cast Members on the Animal Care Team! 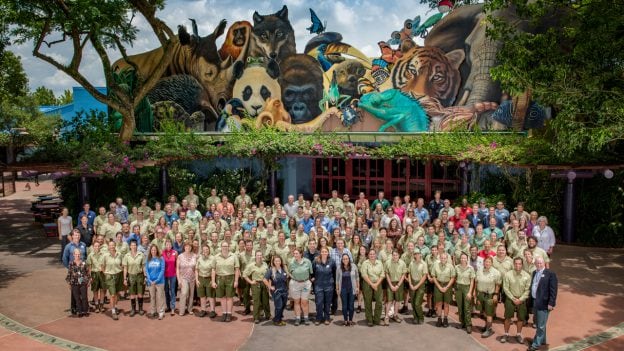 A lot has happened over the past few months on the animal front with the births of Disney’s Animal Kingdom’s newest additions like the baby fowls, porcupette, and piglet.  This all wouldn’t be possible without the incredible team of Animal Care Cast Members that are truly passionate about what they do.

“These cast members hail from all over the world and bring a range of different skills and talents together to care for the thousands of animals who call our parks and resorts home. They’re not only dedicated to the animals in our care but they’re also some of the most passionate conservationists I know. I am so proud to lead this team of dedicated, talented cast.

Our company’s passion for animals and conservation dates back to Walt Disney himself, who created the True-Life Adventures film series to take audiences into the lives of animals that they may never see personally. We’re so honored to carry on that legacy and continue to share the importance of living in harmony with nature and working to protect the wonderous animals on our planet.

Caring for animals is a 24/7, 365 days a year, responsibility, and our teams work diligently to keep the well-being of each animal their number one priority.”

Since Dr. Penning has joined social media, we’ve been getting to see a little more of the behind the scenes of caring for all the Walt Disney World animals on Instagram.  Starting this fall, we’ll be able to see more of the back of the house magic of Disney’s Animal Kingdom and The Seas with Nemo & Friends at EPCOT.

With the help of National Geographic, this new series will be streaming on Disney+ this fall to show us just what the Animal Care Team at Walt Disney World does.  Get ready to have your hearts melted Disney fans, because the daily operations of deals with some pretty adorable wildlife friends!

Meet the Animal Kingdom animals in person on your next Disney World trip — book a vacation here!

Comments Off on Thank You, Disney World Animal Care Workers!