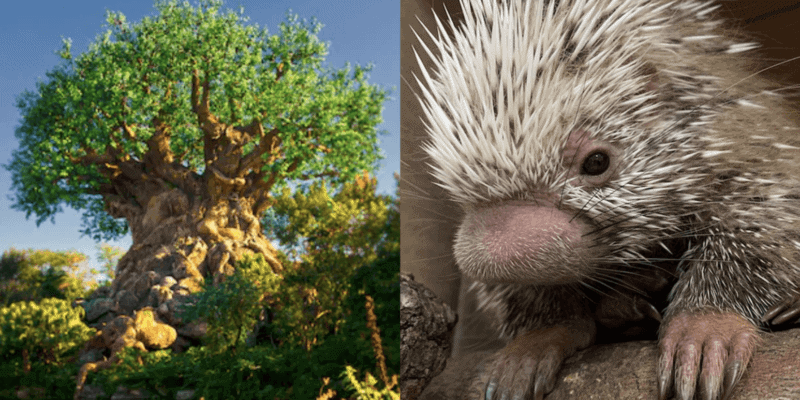 In February, the animal care team at Disney’s Animal Kingdom welcomed a baby prehensile-tailed porcupine. Known as a porcupette, the new animal baby was born to mom, Peri.

Now, the tiny porcupette has a name! Meet Shelley.

Shelley joins another new DAK family member, a baby zebra named Asha. Nobody does backstories better than Disney Parks and, as you would expect, Shelley the porcupine’s name comes with a sweet, meaningful story.

According to the Disney Parks Blog, “The Animals, Science and Environment team [at Walt Disney World] named the baby in honor of Veterinary Operations Manager Shelley, who played an important role in the baby’s birth. Thanks to Shelley’s dedication to training, the baby’s mom, Peri, was able participate in ultrasounds essential for prenatal care.”

Cast Member Shelley has a special bond with porcupette Shelley’s mother, Peri, and is also bonding with the baby porcupine. Baby Shelley is growing and thriving, now weighing in at over two pounds (her birth weight was less than 1/3 of that!)

If you would like to see some of Peri the porcupine’s prenatal journey, tune into One Day at Disney on Disney+. The Disney documentary features some of Disney veterinarian, Dr. Natalie’s, visits with Peri before Shelley was born.

Despite the extended Walt Disney World Resort closure, the team at Disney’s Animal Kingdom has still been hard at work caring for the wildlife that resides in the theme park.

The theme park team is committed to responsible breeding and genetic diversity, which makes Walt Disney World’s Animal Kingdom a standout in the wildlife world.

Imagineer and DAK creator, Joe Rohde, also took time to indirectly recognize the Disney theme park, which celebrates all forms of life, on Earth Day. He reminded his fans that “You are not alone. Life is all around you.” This inspiring message is especially important right now!

We can’t wait to see the Animal Kingdom team officially back in action soon. Contact the expert Disney Vacation Planners at Academy Travel to start planning your return to Walt Disney World Resort in Orlando today!