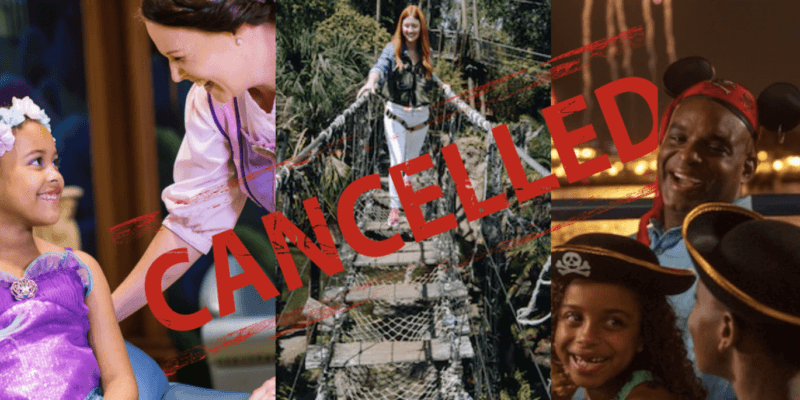 Following yesterday’s announcements regarding seasonal events, including the modification of the EPCOT International Food & Wine Festival, cancellation of Mickey’s Not-So-Scary Halloween Party, and possible cancellation of Mickey’s Very Merry Christmas Party, Walt Disney World has released a full list of experiences that will be unavailable when their phased reopening starts on July 11.

The Disney World website has broken down all unavailable Disney Parks experiences by type, starting with “Unique Tours.”

Since all character dining reservations are suspended and the Disney Dining Plan is currently on-hold at Walt Disney World Resort, it is unsurprising that all “Adventures in Dining” will be unavailable when the Florida theme park reopens in mid-July.

The canceled Disney dining events include:

All of Disney World’s popular dessert parties have also been suspended for the time being. Since the majority of these dessert events coincide with firework shows, which have also been canceled right now, it is unsurprising that Guests cannot book them.

Finally, Walt Disney World Resort has announced that Guests will not currently be able to participate in the following “Make Believe & More” experiences, which are especially popular among families with children:

If you currently have a Walt Disney World Resort vacation booked for this summer and you have questions about existing reservations, reach out to a Disney Cast Member directly at (407) 939-5277 or manage your Disney Parks vacation online.

What do you think about the activities that won’t be available when Disney World reopens? Tell us in the comments!