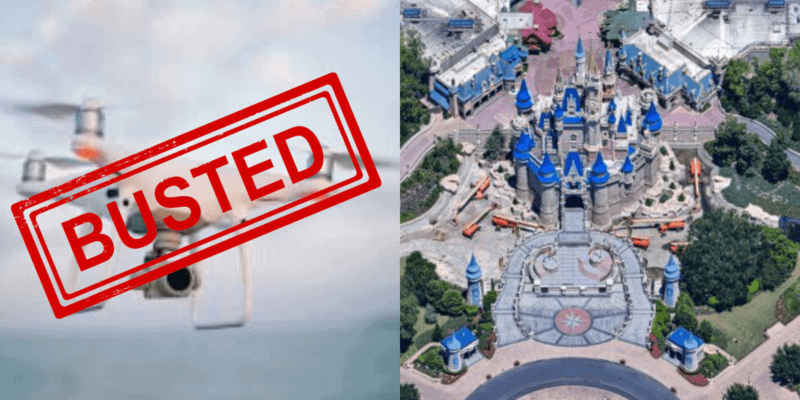 As Walt Disney World sat empty due to the global pandemic, one thing fans could not get enough of was aerial photographs of the beloved theme parks completely empty.

Several adventurous pilots and photographers have taken up the challenge of capturing those pictures. I have even had the pleasure of going on one of those adventures myself. Jaw-dropping pictures have shown Disney fans their favorite parks from a whole new perspective. And everything went according to the flight plan.

That was not the case of one drone pilot. While attempting to outdo all the other aerial photographs and take a beautiful picture of Cinderella Castle at sunset, both he and his drone were spotted.

The drone was caught on the scene by Disney security. It was hovering less than 100 feet from the castle. The pilot was found sitting in a parking lot of an apartment complex by an off-duty Orange County Sheriff’s deputy.

According to the Orlando Sentinel:

“I asked him why he was in a parking lot of an apartment complex he did not live in and standing behind trees out of view from Reams Road, he did not have a clear answer to the question,” the deputy said in the May 20 incident report.

After several sheriff’s cars arrived, the man said he felt embarrassed. He didn’t realize his drone could be perceived as a threat. He just thought an empty park would be the perfect place to fly above since he couldn’t crash into any guests, he said after being confronted by the sheriff’s department and Disney security.

In a word, he was busted.

The Magic Kingdom has a TRF (temporary flight restriction) in place and has had it in place since the 9/11 terrorist attacks. According to the Orange County Register, the ban includes drones as well as any unmanned remote-controlled devices.

Inside the Magic can confirm that all of the aerial pictures we have shared (including the ones that are within this article, which were not taken by the trespassing drone pilot) were taken while abiding by FAA flight restrictions be it maintaining a flight path for a very quick flyby over the property or maintaining a minimal distance and altitude. Special lenses were used to make it appear we were a lot closer than we were.

While the Florida man is not being charged with a crime, Disney did issue him a trespass warning. All footage he would have been able to share was also deleted. The Orlando Sentinel reports that the drone pilot hopes he isn’t banned from the theme parks forever; he wants to get hired someday as a contractor for the company.

Walt Disney World is set to begin its phased reopening on July 11 opening the gates to the Magic Kingdom and Disney’s Animal Kingdom first followed by EPCOT and Disney’s Hollywood Studios on July 15.

Do you think drones should be allowed inside Disney Parks? Why or why not? Let us know in the comments!