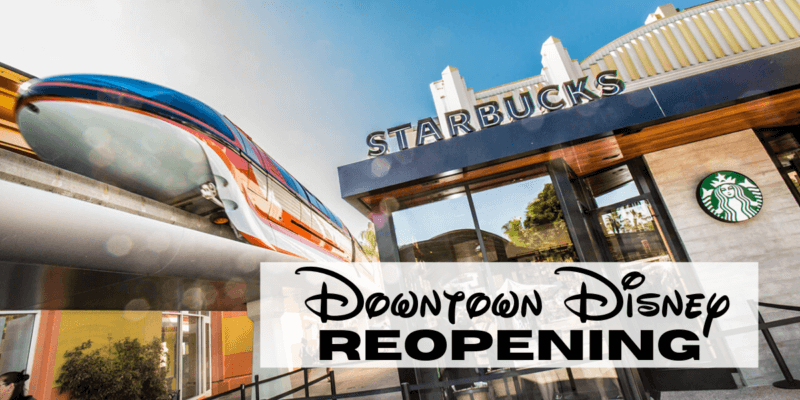 Businesses at Downtown Disney at Disneyland Resort are beginning to confirm their reopening dates. Since receiving an initial confirmation from one Downtown Disney restaurant when this article was first published, we have continued to update this article with the reopening plans for other businesses. However, if you want a full list that Disney has released since we originally published this article, please click here.

Disney confirmed in the initial announcement of the phased reopening of Disneyland Resort that World of Disney will be reopening on the same day that Downtown Disney reopens.

Downtown Disney District will begin reopening on July 9 in line with the state’s reopening guidelines, with its unique variety of shopping and dining experiences, including the flagship World of Disney store. With the health of guests and Disney cast members at the forefront of planning, several operational changes will be implemented based on guidance from health authorities to promote physical distancing and cleanliness throughout the Downtown Disney District.

Starbucks also confirmed with Inside the Magic that at least the location closest to World of Disney will be reopening, and more details will be coming soon.

The ice cream shop Salt & Straw confirmed on their official website that they will be reopening on July 9.

Additionally, Rinse Bath & Body — the shop carrying natural bath and body products at Downtown Disney — will also be reopening on July 9. The shop confirmed this in a message to Inside the Magic.

The retail locations Curl Surf and Sugarboo & Co. also confirmed in messages to Inside the Magic that they plan to reopen on July 9.

Disneyland Resort initially announced its phased reopening plans in mid-June. So far, it has been confirmed and approved for Downtown Disney to reopen on July 9, and two onsite hotels (Disney’s Grand Californian Hotel & Spa and Disney’s Paradise Pier Hotel) to reopen on July 23. At this time, the Disneyland and Disney California Adventure theme parks are pending approval from state and local governments for a July 17 reopening date. There are no announced plans for the reopening of the Disneyland Hotel.

We will continue to update this article with more information regarding which restaurants will be open for dining on July 9 when Downtown Disney reopens. Additionally, Ballast Point, Catal Restaurant, Naples Ristorante, and Ralph Brennan’s Jazz Kitchen — all of which are Downtown Disney restaurants — are listed on OpenTable, although reservations are not available yet. We suspect they will become available soon.

Stay up-to-date with Inside the Magic with the latest news on the phased reopening of Disneyland Resort, the Happiest Place on Earth.