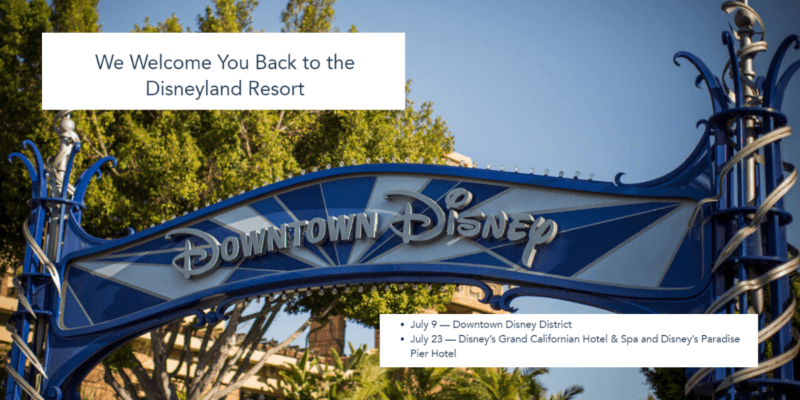 Disneyland Resort has confirmed that Downtown Disney and two onsite hotels (Disney’s Grand Californian Hotel & Spa and Disney’s Paradise Pier Hotel) will be reopening next month. The update was made on the official website today.

At the time of this article’s publication, the Disneyland website now states that only the reopening of Disneyland park and Disney California Adventure park await approval. Prior to this update, the website stated that Downtown Disney would reopen on July 9, but two onsite hotels were still pending state and local government approvals. Now, Downtown Disney and two of the three hotels are confirmed to be reopening next month. There is still no information about when the Disneyland Hotel will reopen.

The new verbiage was shared on the Experience Updates page of the Disneyland Resort website. See below:

We are pleased to announce our proposed plans for a phased reopening of the Disneyland Resort.

The Disney Parks have continued to stress health and safety as a top priority when reopening Walt Disney World Resort, Disneyland Resort, and the rest of the Disney Parks worldwide. They have also begun a new campaign using the Incredibles in order to encourage Guests to abide by the new protocol.

Disney has also confirmed that face coverings will be mandatory for all Guests and Cast Members when the phased reopening of Disneyland Resort begins.