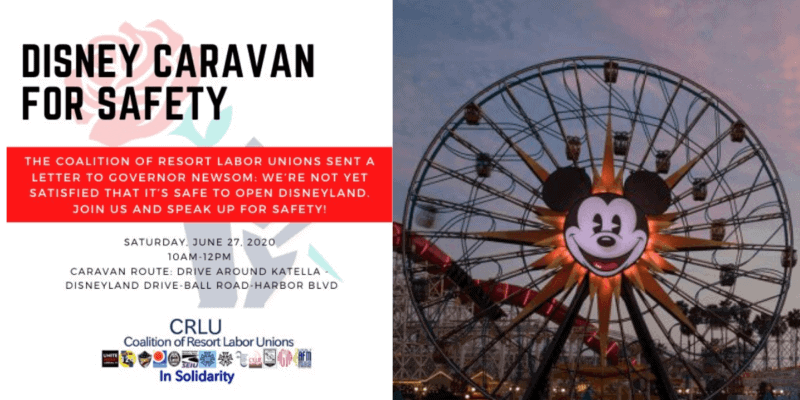 Unions representing Cast Members at the Disneyland Resort have planned a protest in response to the proposed July 17 reopening date for Disneyland and Disney California Adventure.

The Facebook event for the protest — which is titled Disney Caravan for Safety — reads, “The Unions are organizing a caravan to circle the resort as an action to show our concerns regarding safety. Come out and join us.” Another event page description reads, “The Coalition of Resort Labor Unions sent a letter to Governor Newsom: We’re not yet satisfied that it’s safe to open Disneyland. Join us and speak up for safety!”

The caravan is scheduled for this Saturday, June 27, from 10 a.m. to noon. Participants plan to drive around the perimeter of Disneyland Resort to make their voices heard.

The event is being hosted by the Coalition of Resort Labor Unions (CLRU), which, earlier this month, sent a letter to the California state government urging Governor Gavin Newsom to reexamine Disneyland Resort’s proposed reopening dates for the theme parks. Twelve unions representing over 17,000 Cast Members make up the CLRU.

You can view the full Facebook event here and another event page here.

But when it comes to reopening the parks, Disney continues to reiterate that health and safety are a top priority. Disney Parks Chief Medical Officer Dr. Pamela Hymel shared this month, “We’re taking a multi-pronged approach to our reopening, after considering the guidance of various governmental authorities and health agencies, including the Centers for Disease Control and Prevention (CDC), and recommendations from our team of health and safety experts. We’re also actively working with industry groups and research universities to discuss best practices.”

The protest was scheduled around the same time that working conditions for returning Disneyland Resort Cast Members were released. The conditions state the requirements of face masks and temperature checks for all employees, but also state that Cast Members will have one chance to decline a return to work in the first wave and remain on furlough without putting their position and benefits at risk. You can read more details here.

At this time, Disneyland Resort is set to begin a phased reopening next month. Downtown Disney has been approved to reopen on July 9. Disney’s Grand Californian Hotel & Spa and Disney’s Paradise Pier Hotel have been approved to reopen on July 23. The reopening date of July 17 for Disneyland and Disney California Adventure theme parks is still pending approval. Reopening plans for the Disneyland Hotel have yet to be revealed.

We will continue to update Inside the Magic as more information regarding Disneyland Resort’s phased reopening comes to light. For more information, read our FAQ article here.

Comments Off on Disney Unions to Protest Theme Parks Reopening