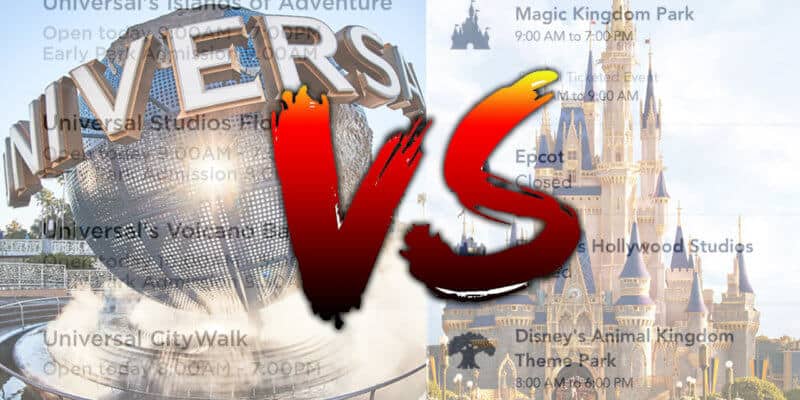 It’s official, Universal Orlando is now reopened to the general public as today is the first day guests who are not Annual Passholders can enter all three of the theme park resort’s parks. Although, this is not without new precautions and limited hours, which Walt Disney World plans to follow upon its reopening. Here is a look at both vacation destination’s operating hours in-depth.

Looking at these operation times, they seem to vary depending upon resort and theme park type, whether they are traditional water parks or theme parks.

As we all know, Walt Disney World will not be having fireworks shows upon reopening, which could be part of the reasoning behind Magic Kingdom’s early closing time of 6 PM. This early nightly closure could push some to head over to Universal Orlando where both Islands of Adventure and Universal Studios Florida are open a full hour later than the most magical place on earth.

Although, Walt Disney World has Universal beat when it comes to water parks as both Disney’s Typhoon Lagoon and Blizzard Beach parks are set to stay open till 8:00 PM while Universal’s Volcano Bay will only remain open until 5:00 PM–three full hours less than the competition.

EPCOT seems to be the park to be at if guests are looking to stay out later as its currently set to stay open until 9:00 PM daily. As a reminder about this park and Disney’s Hollywood Studios, both will not be reopening with the rest of Walt Disney World on July 11 as these parks will not resume operations until July 15.

What are your thoughts on the new hours of operations coming to both the Walt Disney World and Universal Orlando theme parks? Let us know in the comments!