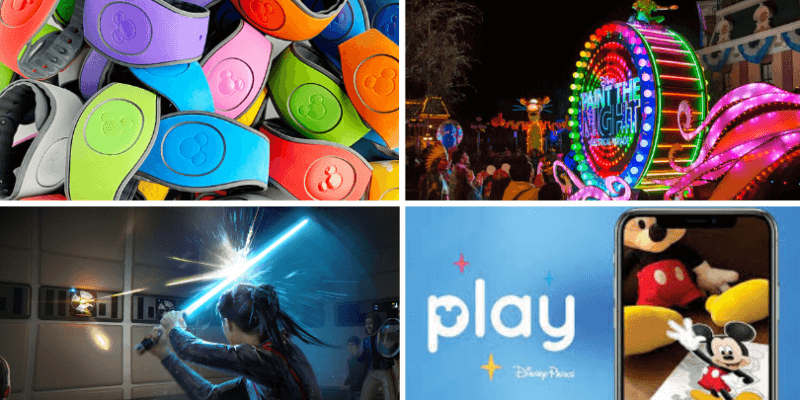 A Disney Park is the Happiest Place on Earth, nothing short of magical, wonderful, and joyful. It is a place where dreams come true with the help of pixie dust, Cast Members, characters, and — that’s right — technology.

Technological magic helps Disney transform theme park experiences and elevate life at a Disney Park to nothing less than extraordinary. Through the use of MagicBands at Walt Disney World, immersive attractions at Disney theme parks all around the globe, and new and exciting technology currently in development, technology has and will continue to elevate Disney life.

“The MagicBand is an example of how we use technology to create great memories through these really frictionless moments, whether it’s going to your hotel or getting on a ride,” said Kelly White, Walt Disney World Vice President of Digital Strategy, in an interview with Forbes.

If you’ve never visited Walt Disney World Resort or you want to know a bit more background information on MagicBands, here’s how they are described on the official website:

MagicBands are colorful, waterproof wristbands—resembling a watch or bracelet—that you can quickly and easily touch to a sensor called a touch point. Cards work in a similar fashion, but physically resemble a plastic credit card or driver’s license. Both MagicBands and cards allow you to travel lighter throughout your vacation.

You can use your MagicBand or card to:

A MagicBand can also:

Forbes notes in their article that White walked them through even more wireless interactivity that Disney plans to introduce to the theme parks in order to create magic for Guests. She noted the DuckTales interactive game coming soon to EPCOT, the Play Disney Parks app with the Star Wars Datapad (available at both Disneyland Resort and Disney World), and more experiences that allow Guests to use their (or their parents’) smartphones in order to interact with the Disney Parks in different ways.

White said, “We think about our guests as Disney Parks guests and Disney Parks fans but they are also Disney fans so we continue to think about giving them connectivity across all of these touch points.”

This means that Guests can stay connected to Disneyland and Disney World theme parks even after they leave the gates. This comes in the form of augmented reality greetings from Mickey Mouse, something that is available to guests who stay three nights or more in a Disney Resort hotel.

But these experiences aren’t the only proof of technological strides made at Disney Parks. Earlier this year, Disney released an official video of perhaps the most innovative animatronic we’ve seen yet: the Spider-Man stuntronic.

“Stuntronics — new robotic figure developed by Disney Imagineers — performs extreme aerial maneuvers 60 feet in the air, making real-time decisions for when to tuck, turn, and stick the perfect landing,” Disney originally said of the stuntronic back when it was first revealed to be in development in 2018.

Developed by Walt Disney Imagineering, a stuntronic is a robotic figure that is programmed to seamlessly perform stunts before Guests’ very eyes. In this case, a Spider-Man stuntronic will be performing acrobatics in Avengers Campus, the new Marvel-themed land opening soon at Disney California Adventure at Disneyland Resort. This stuntronic will be the first of its kind at the Disney Parks, and it’s sure to wow guests every time they catch a glimpse of it.

Disney has also filed numerous patents for technology that is in development for the theme parks. Within the past several months, Disney has filed patents for new ground-shaking technology, a “portable Pepper’s Ghost effect,” and even an interactive wand device with audiovisual effects (which many speculate will actually become part of a lightsaber training activity at the Star Wars Galactic Starcruiser hotel at Disney World).

And when it comes to parades, Disney is constantly raising the bar. At the U.S. Disney Parks alone, we have seen remarkable technology used in two Disneyland Resort parades: the Paint the Night parade with the countless LED lights on every float, and the Moana float in the Magic Happens parade with its LED screen. These parades have brought wonder and joy to Disneyland Resort Guests, and a new patent even suggests that Magic Kingdom could be getting a new technologically advanced parade of its own.

It’s clear that Disney Parks are constantly using technology to bring new and exciting experiences to Guests, and we can’t wait to see what else is coming in the future. These are only a few examples of the many ways Disney Parks and Resorts use new technology to elevate the theme parks — and in the years to come, we’re sure the parks will only get better.