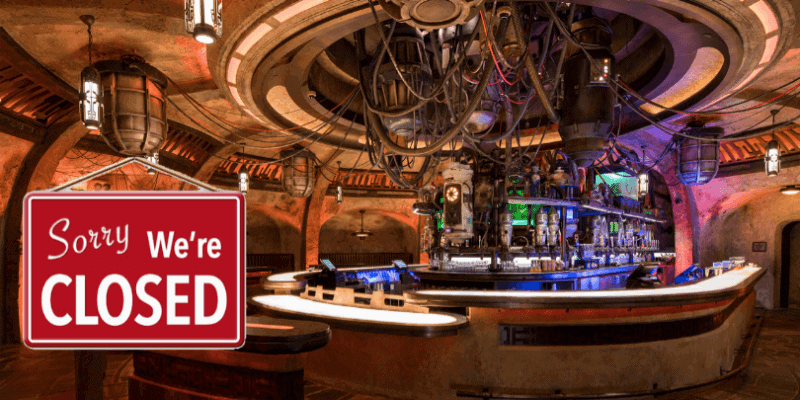 Though it is still indicated that the Palmas Restaurant Group locations inside the EPCOT Mexico Pavilion will be reopening July 15th, they recently announced the layoff of some employees.  More information can be found here.

According to a new update from the state of Florida, bars are allowed to operate if they sell both food and alcohol. You can read more here.

Disney has now stated that Oga’s Cantina will in fact reopen on July 15, even though it previously was not listed as one of the dining locations reopening with the theme parks. For more information on available dining, please refer to this list of Walt Disney World to reopen.

On June 26, Florida Governor Ron DeSantis announced that effective immediately, Florida would be suspending alcohol consumption at bars.  We know that this new ordinance affected some locations at Disney Springs that are Disney-owned, as well as third-party bars.  So how does this affect dining locations that serve alcohol inside the theme parks when Walt Disney World reopens next month?

Last week, we shared a list of the dining locations that would be open inside the theme parks when each park reopens.  Today, Oga’s Cantina was removed off that list, but it was previously listed. We aren’t sure if this was due to the new Florida ordinance which suspends on-site alcohol consumption or if this was for another reason.  As of right now, it is the only location that has been removed from the original list that was published.

What About Other Locations Inside the Parks?

As mentioned, Oga’s Cantina at Disney’s Hollywood Studios was the only dining location to be removed from the list of restaurants reopening in the Disney World theme parks. But there are other dining locations that have bars or serve alcohol that remain on the list.  Such places are that of La Cava de Tequila in the Mexico Pavilion and the UK Beer Cart in the UK Pavilion at EPCOT.  We don’t know at this time if locations like this will be affected by the ban on alcohol consumption at bars in Florida, but here is a list of dining locations that will remain closed when the parks reopen.

There have been a lot of questions that come along with this state ordinance on whether alcohol can still be consumed in restaurants.  From what we know, this ordinance pertains to bars, so it allows restaurants to continue to serve food and alcoholic beverages.  Dining locations like this could include Le Cellier Steakhouse and Biergarten Restaurant at EPCOT, both of which — along with most other restaurants on Disney World property — serve alcoholic beverages with sit-down meals.  We will continue to update as more information comes and if any other locations inside the theme parks are affected.

Comments Off on Will Disney Park Bars Be Affected by Alcohol Suspension?