Despite Financial Struggles, AMC Releases Reopening Plan - Inside the Magic 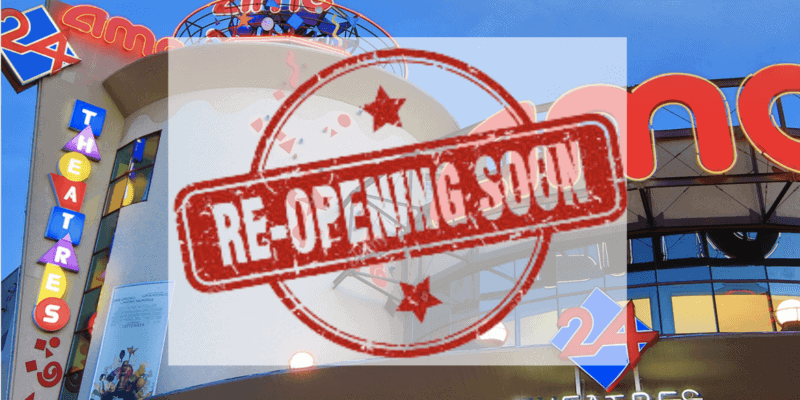 Amid reports of potential bankruptcy, substantial doubt about having enough cash to continue operating, and potential buyouts, AMC Theatres announced a reopening plan that includes nearly all of it’s U.S. movie theaters.

On Twitter, Carter shared a string of Tweets outlining AMC’s July reopening plan, which will reportedly take place “in time for the release of Christopher Nolan’s Tenet (July 17) and Disney’s Mulan (July 24).”

AMC Theatres plans to reopen almost all of its U.S. theaters in July, in time for the release of Christopher Nolan's #Tenet (July 17) and Disney's #Mulan (July 24). pic.twitter.com/QoTtpAoXHB

Carter also shared information about the steps that AMC entertainment will be taking to ensure guest safety when their theaters do reopen to the public.

As per AMC’s release, the entertainment company will be:

AMC Theatres' reopening plan comes a week after rival Cinemark revealed it would begin reopening its movie theaters this month. Thread on that and the new measures, here: https://t.co/Ux92YMqIEA

In an interesting twist, Carter reported that the AMC theater chain is currently in “active dialogue with Universal,” whose movies CEO Adam Aron banned following the streaming release of Trolls World Tour. Only time will tell if Universal film studios movies will begin playing on AMC screens again in the near future.

AMC says it's in "active dialogue with Universal" but no movies from the studio are currently on its schedule.

It remains to be seen what both AMC and Cinemark will do if Walt Disney Studios or Warner Brothers make changes to their current theatrical release schedules. There have been some talks of the live-action Disney’s Mulan debuting on Disney+, though these remain unconfirmed by Disney executives.

What does this mean for the Disney Springs AMC?

Although an official reopening date for the AMC theater at Disney Springs has not been announced, there are certain protocols that visitors will need to follow before entering the Disney Springs shopping and dining complex, regardless of AMC’s specific policies.

If, for example, AMC theatre regulations dictate that face masks are optional in their theaters, Disney Springs Guests will still need to wear proper face coverings for their entire visits.

What do you think about the AMC reopening plan? Tell us in the comments!

Comments Off on Despite Financial Struggles, AMC Releases Reopening Plan