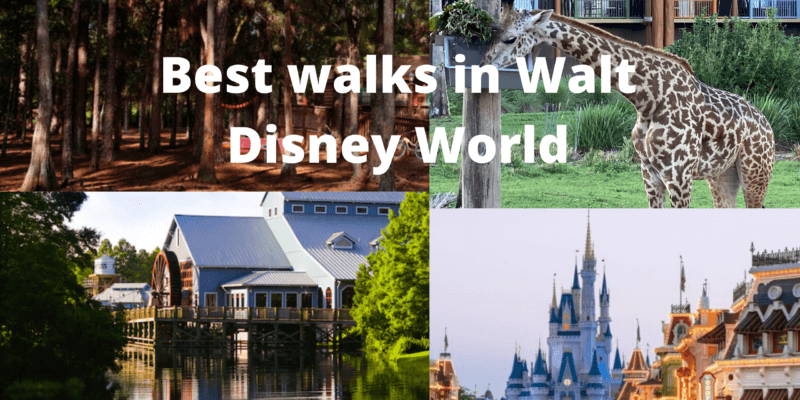 The Disney Parks aren’t just about riding one of your favorite attraction or tucking into a delicious treat and one of the things we’re missing most about Walt Disney World at the moment is not being able to take in the sheer beauty that the resort has on offer. From relaxing walks around some of the hotels to the breathtaking sights of the theme parks, here are just 8 walks in Walt Disney World that we love.

I don’t make it a secret that the Animal Kingdom Lodge is one of the best hotels at Walt Disney World and quite possibly, the entire planet. I have so many happy memories there from asking my now wife to marry me and finding out last October that we were expecting our first child (due very soon).

Here’s a couple of pictures I took during our last trip:

If you love animals and want somewhere quiet to just have a wander, the Animal Kingdom Lodge is a fantastic place to do so.

On a very different scale, World Showcase in EPCOT is a great place to take in some of the cultures that the countries of the world have to offer. Now while you might be thinking that it isn’t very relaxing, it can be.

If you time your walk around World Showcase when a Festival (such as the EPCOT International Food and Wine Festival) isn’t at the park then you will find World Showcase to be largely empty.

Take the time to explore the amazing work that Disney’s Imagineers poured into every detail of each country around World Showcase. Explore the shops, the dining locations and detail and you will find yourself very relaxed by the end of your day (especially if you’re drinking around the world).

Again, it’s no secret that EPCOT is my favorite theme park.

There’s a fantastic walkway that goes around the entire Port Orleans Resort. It encompasses both French Quarter and Riverside and on a warm evening, it’s a relaxing 1.7-mile walk around the river.

Better yet, you can stop at a quick service location on both sides for snacks, important to keep that energy up and remember, calories don’t count when you’re on vacation!

The walk will take you well over an hour and you’ll want to stop for a drink along one of the great locations of the Boardwalk to take a breather as the sun can be pretty intense along this walk in the middle of the day.

Saratoga Springs is one of the hidden gems of Walt Disney World. Hardly anyone I know raises it in conversation when I speak about Disney hotels, and yet I would rate it as one of the best on the property, particularly for its location.

Though you have the option of catching the bus or boat to Disney Springs, the walk is far more rewarding as you get to walk past Saratoga Springs on one side and see Disney Springs on the other!

When we aren’t at the parks we are in Disney Springs taking in a meal, show or doing some shopping and staying at Saratoga gives a fantastic opportunity to get a relaxing walk in and work up an appetite!

The Resort (including the Lodge) has so much room to walk around that the majority of people rent golf carts to travel from A to B!  There’s a two and a half-mile trail for walking and running that is just beautiful and worth checking out.

This lake sits between Disney’s Pop Century and Disney’s Art of Animation Resorts and is a great excuse to explore both hotels if you have some downtime during a trip.

If you’re traveling to Orlando from Europe then you will likely have at least some time to spare in your trip, so combining a walk with the chance to see two onsite hotels is a great way to spend an afternoon!

Perhaps the most breathtaking on the list is the walk down Main Street, U.S.A. While it may not be considered relaxing for some, there’s nothing more relaxing to me than arriving at the Magic Kingdom and feeling like I am home again.

The first walk down Main Street of any trip is unlike anything else on your whole vacation.

What do you think of our list? Is there a walk you would like to see added to the list? Let us know in the comments below!