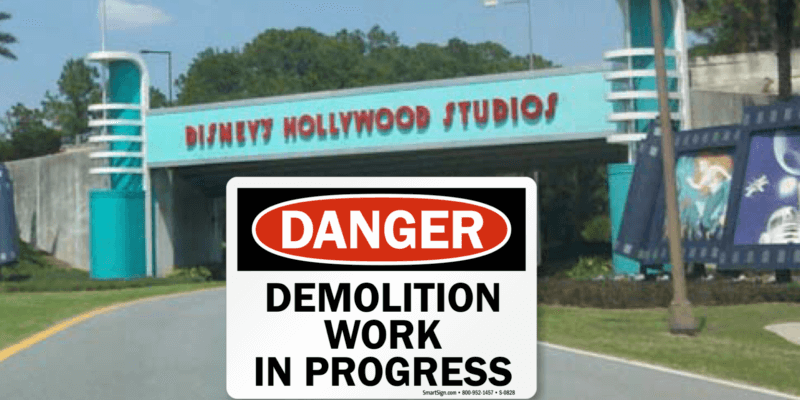 The construction might be currently halted for these new projects due to the current situation happening around the world. However, in a recent drive around the Walt Disney World Resort, we noticed a big change that quietly happened at Disney’s Hollywood Studios.

Not too long ago, with the expansion of its parking lot, Disney’s Hollywood Studios also redirected its traffic through a brand-new entrance. The old entrance had since become a Cast Member only entrance, however, the old entrance and sign were still there. That is no longer the case.

In these pictures, you can see the entire underpass that used to hold the Disney’s Hollywood Studios sign is gone. The surrounding areas are also getting gutted and looks very much under construction. You also get a pretty cool view of Star Wars: Galaxy’s Edge’s spires.

Inside the Magic reporter, Emille, who lives in Central Florida, took a drive through the Walt Disney World Resort recently to see the sights during the recent closures. Not only did she spot this construction, but as you can see the resort is really deserted.

The entrance to the Ticket and Transportation (Magic Kingdom Park) Parking Lot was blocked off with only some Disney security vehicles driving the perimeter.

The parking lot was bare except for the guest trams and rows and rows of Disney busses lined up neatly awaiting the news of the re-opening, just like the rest of us!

Be sure to continue checking back with us here at Inside the Magic for the most up-to-date information on Disney Parks, their reopening schedules, and more! See ya real soon!