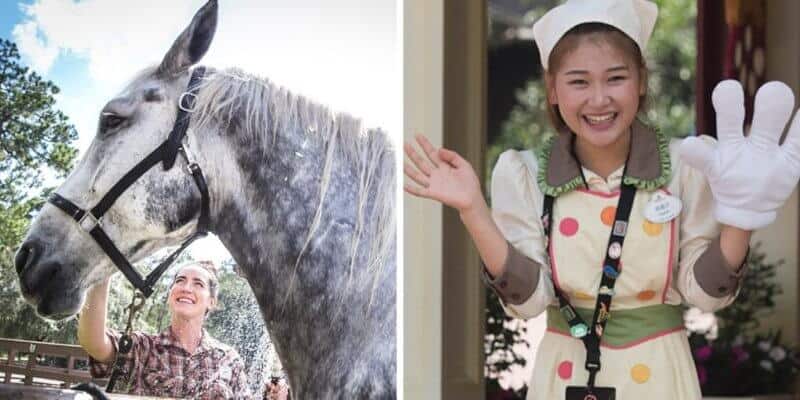 Disney is such a massive company that there are hundreds of thousands of jobs to do at any given time. Due to the high level of pride that The Walt Disney Company takes in its theme park operations, there are Cast Members of every background and field of study, working together to make sure the parks and resorts are in tip top shape.

Part of the charm of Disney is to feel like you’re being transported to a magical place the minute you step onto property for your Disney Vacation. But this doesn’t happen without the right team of people coming together and an incredible amount of hard work behind the scenes.

Disney cast members were recently given their moment of glory with the release of the book, documentary and short-run series One Day at Disney.

The series highlights a slew of Cast Members covering various roles and specialties that many people might not even realize are jobs! The premise is to show the scale of what goes on behind closed doors in a single day working for the Mouse.

It’s truly an incredible thing to see all of the care and dedication that these awesome Cast Members show through their roles every single day. It’s their goal to make sure every single second spent at a Disney park is a magical moment!

One Day at Disney Features All Types of Cast Members

We’ve chosen to highlight a few roles from the One Day at Disney project that many people may not even realize exist. Some of that is on purpose — to help keep up the magic.

Others are jobs that focus on areas of the parks that always seem to be working and looking perfect — and it’s due to the tireless efforts of Cast Members behind the scenes and after hours!

If you’ve ever wondered how the window displays in the various parks always seem to be perfectly themed and in tip top shape, you can thank Disney’s window display decorators. These displays perfectly highlight the magic of the parks.

They create a sense of awe in every passerby, that makes them want to head inside and check out the stores. These displays change throughout the year and are often based around holidays and special events. As anyone who works in the design field knows, a job such as this one requires an eye for detail, color and cohesiveness!.

Every attraction in the park requires regular maintenance and upkeep to ensure that the ride operates smoothly during each of the parks’ open hours. Some might forget that this includes the ever-popular series of water rides on property!

Rides such as it’s a small world, Pirates of The Caribbean and The Jungle Cruise all have underwater tracks that need to be maintained consistently and cleared of any debris that may fall from the boats while guests are riding. This amazing team operates during the nighttime and are all machinists with scuba certifications! How cool is that?

The Walt Disney World Resort alone in Orlando, Florida is home to over 100 horses. These adorable showstoppers can be found living on the Tri-Circle-D Ranch at Disney’s Fort Wilderness Trail area.

The Cast Members that work as ranch hands with these horses, have a very special job that requires wearing many hats. They take care of all of the horses on property and prep them for shows. They can also be seen working alongside the horses as they appear in the various parades in Magic Kingdom and the wedding carriage offered through Disney Fairytale Weddings!

I think we can all agree that the various Disney parks and resorts worldwide are all incredibly aesthetic. A big part of that is the landscaping that takes place and the very intentional placement and selection of trees that are planted in different areas. In fact, Disneyland resort alone has over 17,000 trees throughout the property!

This scale requires a dedicated team of arborists who work day in and day out to make sure that there isn’t one single leaf out of place when guests are visiting the parks. The Disney arborists work to prune, trim, and design the various trees in ways that fit in with the overall theme of the different areas on property.

If you’ve watched any of the Decorating Disney specials in the past you’ve probably seen these holly-jolly Cast Members in action. I am always in awe of the holiday decoration wranglers and the year round effort they put into the upkeep, planning and execution of Disney’s insane holiday decorations.

It’s a well known thing at Disney that most of the holiday decorating happens at night. Guests can leave the park at midnight through a fall themed Main Street and come back first thing the next morning to a wintery wonderland!

Be sure to check out the One Day at Disney book, series and documentary (found on Disney+) to learn about other amazing Disney cast members and their roles!