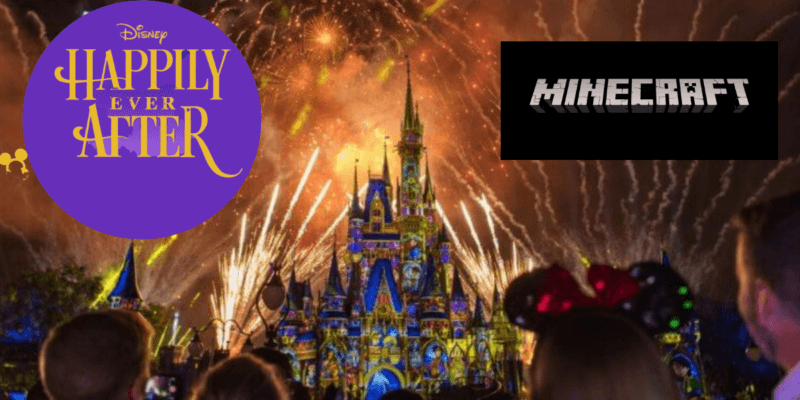 The Disney theme park‘s firework and projection mapping shows have taken fans by storm all over again amidst their worldwide closure.

We’ve seen the Disney Parks Blog and individual park Youtube channels share recordings of Disney Dreams and Disney Illuminations at Disneyland Paris, as well as the Magic Kingdom‘s premier show; Happily Ever After.

We’ve also seen one fan take the worlds of Twitter and Reddit by storm by building the entire Walt Disney World Resort out of Lego, including the incredible light show.

Well, if you liked that, the enchantment is just beginning;

Minecraft Community group MC Parks had the amazing idea to pay homage to one of Disney’s most iconic light and firework shows with this spot on Minecraft recreation. The video was recorded by Youtube user Epcat77.

Check out some of MC Parks’ other theme park recreations on their website or Youtube Channel. The Minecraft community just loved this amazing Magic Kingdom park recreation, and it’s not hard to see why.

Walt Disney World’s Happily Ever After show in Minecraft

Your imagination is the limit when it comes to the creative world of Minecraft.

The attention to detail that the team at MC Parks has been able to capture is staggering. In The Hunchback of Notre Dame section, for example, they’ve even created a little silhouette of Quasimodo, swinging around the castle!

The little Genie during ‘Friend Like Me’ is also a real treat.

It’s super difficult to try and time lights, fireworks, and moving images to the rhythm of fast-moving Disney music, so kudos to the amazing team at MC Parks.

Disney and Minecraft are a natural fit, as both have captured the imagination of their young audiences for years with no sign of slowing down.

What do you think of this Minecraft recreation of Magic Kingdom‘s Happily Ever After show? Let us know in the comments below.