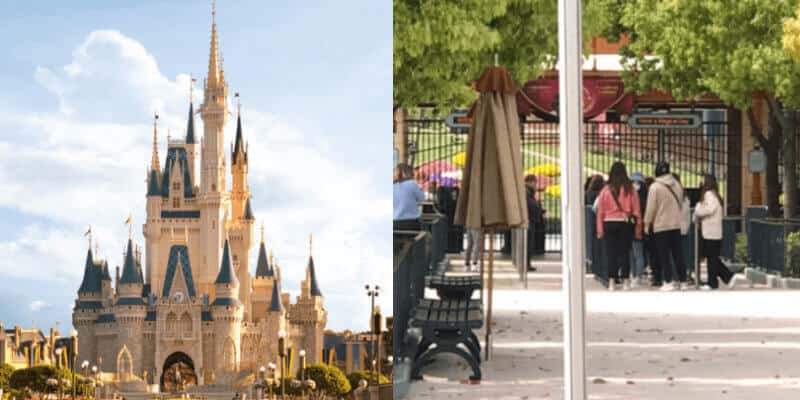 In the wake of the current pandemic, the Walt Disney World theme parks are still closed — with no signs pointing in any direction of when they’ll possibly reopen. As the dates of the parks reopening remain uncertain, it makes us question how the parks will go about reopening? Specifically, if they may attempt soft openings prior to opening to the public to test new safety precautions–and if so, would you volunteer to take part as a guest?

As we shared last week, images on Twitter captured Shanghai Disneyland beginning a simulated reopening with the use of what were believed to be “fake guests.” Now, of course, these guests were not granted admission to the park after running through their simulation. However, they were still able to help the park understand what it will be like when the park reopens using new operational protocols for admitting guests.

As we shared recently, there has been talk of including temperature screenings of park guests, similar to that of current bag check lines. Bob Iger, Executive Chairman of the Walt Disney Company spoke on the subject, saying:

If this were to happen, Disney would more than likely require guests to test this new screening out as a way to iron out any kinks or problems that could arise when going through the process of screening the tens of thousands of guests who enter the park each day — in addition to the screenings procedures of bag checks and metal detectors.

Whether or not Disney World would reach out to a limited number of guests first is unknown as the company might reach out to their cast members first if they were to consider this idea.

To this idea, it’s also worth pointing out that some park goers may not be ready to dive back into Disney World. Here at ITM, we recently asked some of our guests when the Disney Parks should be reopened and some said as late as July.

“July 1 right before the 4th of july which is a Saturday plus the time it takes them to get supplies back into the parks and make sure everything is up to par and yes with restrictions.”

When do you think the Disney Parks should reopen? And if they do reopen in a soft opening, would you volunteer to help Disney in their efforts of trying to go back to a major public opening? Let us know in the comments!