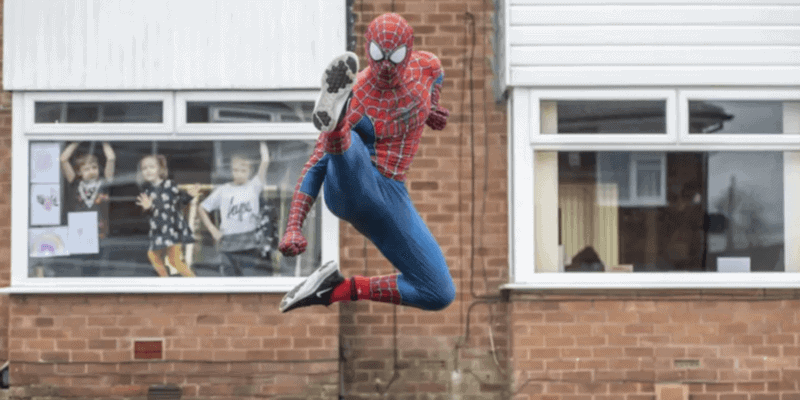 Stockport, Manchester, England is an average middle-class community filled with the same types of families, small businesses, and schools you probably have in your own hometown.

What makes Stockport different, though, is the fact that it is home to dozens of Marvel Universe superheroes, Disney Princesses, and other famous characters from comic books. The real-life storybook tale began when martial arts instructors, Andrew Baldock, age 43, and Jason Baird, age 34, started wearing Spider-Man costumes on their daily runs.

In an interview with Buzzfeed, Baldock stated, “It’s absolutely insane. I started this just in my local neighborhood, I just thought I’d be going out, cheering the kids up.”

After Baldock’s first run as the amazing Spider Man on March 28, Baird began joining him. Then, other local walkers, joggers, and runners wanted to spread positivity as well. Now, the Stockport superheroes and Disney Princesses have two WhatsApp groups to avoid character conflicts.

Baldock gave a breakdown of the Disney, Marvel, and DC Comics characters who frequently appear in the Manchester town, saying “We’ve got more than a handful of Disney princesses, we’ve got a couple of Belles, got a couple of Snow Whites, about four or five of those.”

“We’ve got about four or five Batmen, we’ve got probably about five Spider-Men. We’ve got a Captain Jack Sparrow.”

Although the group certainly wants to create community among Disney and Marvel film fans who appreciate their costumed runs, they are also mindful of social distancing regulations.

During his Buzzfeed interview, Baldock reassured readers, “We’re telling the kids to stay inside, we’re keeping that social distance in place, but obviously trying to make people smile and be happy.”Baird believes that the campaign has the potential to have a global impact.

The Manchester character group has inspired other exercisers as far away as Malta and Japan to dress-up as Marvel comics characters as well! Due to their sudden popularity, Baldock and Baird are now focused on fundraising efforts for England’s National Health Service (NHS) amid the current coronavirus outbreak.

Baldock shared, “That’s what superheroes have always been about. That’s why we call the NHS the true superheroes, this is why we’re supporting them with the JustGiving page that we’re doing.”

The JustGiving page benefits NHS and has received numerous donations, including one from an anonymous individual using the name “Peter Parker.”

This has led some to speculate that “it might be Tom Holland who played Spider-Man, some people are saying it’s Keith Lemon because he followed my academy [Baldock’s martial arts studio] on Instagram around the same time.”

Although we may never know for sure who “Peter Parker” really is, Manchester’s Marvel superheroes and princesses are undoubtedly changing the world for the better!

What do you think about the Manchester Spider Man group and their commitment to spreading happiness? We love it!

Comments Off on Average Town Transforms Into the Home of Superheroes and Disney Princesses!