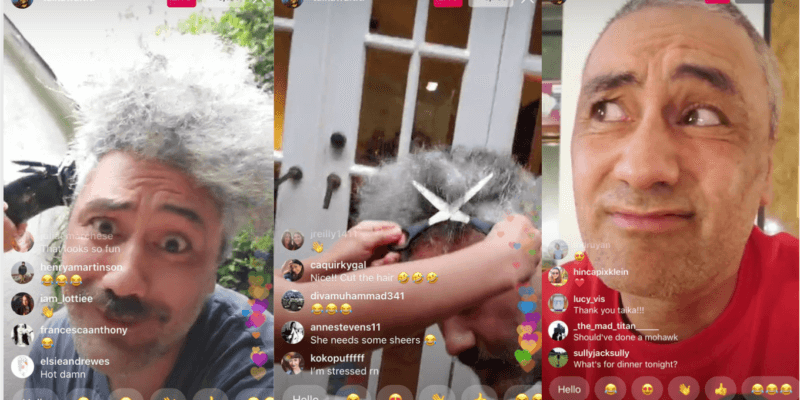 As people around the world self-isolate, celebrities have been taking to social media to stay engaged with their fans. Marvel director Taika Waititi decided to have some fun on Instagram Live by letting his kids cut his unruly hair.

Waititi’s Instagram story has since expired, but Twitter users were on top of the situation, grabbing screenshots and providing commentary throughout the video:

Parents everywhere can relate to the moment Twitter user, @RachelLeishman, shared. Who hasn’t had their child ask for permission while doing the exact (usually questionable) thing they’re asking about?

The greatest part of @TaikaWaititi’s live video was his one kid just like “Can I cut your hair with scissors?” and just did it anyway https://t.co/TZEurYNLR3

Even other celebrities got in on the fun, with Ryan Reynolds asking “Did they use a blow torch or a hammer?” in the comments of the live video. Reynolds portrays Deadpool, who is set to be the first Fox character introduced into the MCU.

and here you can see ryan reynolds having fun in the chat while taika waititi gets his hair cut by his kids pic.twitter.com/ViGtxKF8x7

Waititi, the director of Thor: Ragnarok and the upcoming Thor: Love and Thunder, has been active on social media throughout the current pandemic. While his latest Instagram Live video was all in good fun, Waititi has also posted serious messages for his followers, including this video specifically for his homeland of New Zealand:

“We’re washing everything. We’re washing our backs, our hands, our heads, our ears… I’m so sick of washing stuff! But you, you need to watch your back, because we’re behind you.”

Waititi is currently in self-quarantine at home with his family, but is due to start shooting the fourth installment in the Thor series this August. Thor: Love and Thunder has a tentative release date of November 5, 2021.

The director will also act in the new Thor movie, reprising his role as Korg. Waititi has already portrayed Korg in two MCU films:  Thor: Ragnarok and Avengers: Endgame.

What do you think about Taika Waititi’s kids giving him a live haircut? Are you looking forward to the upcoming installment in the Thor saga? Tell us in the comments!