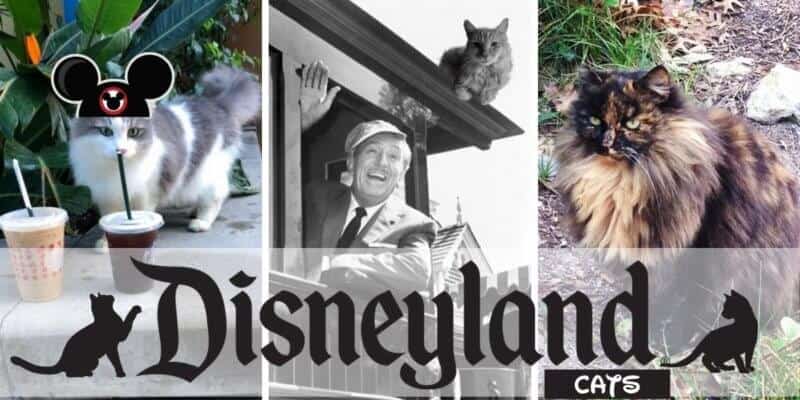 It’s no news that Disney Parks hide some special park features in plain sight, like the hidden suite in Cinderella’s Castle, Walt Disney’s apartment at Magic Kingdom in Disneyland Park, and the private members only Club 33, also located in Disneyland Park.

However, Disneyland Resort in California focuses a lot of their attention on a “secret attraction” in the Disney park 24/7 and they manage to have it hiding in plain sight.

To be more exact, there are around 200 of these “secret attractions”. Yes, you read it right — There are about 200 feral cats at Disneyland! The adorable feral cat colony lives in the happiest place on earth. And now, I bet you are agreeing with the Aristocrat’s song “Everybody Wants to be a Cat”:

“Everybody wants to be a cat, because a cat’s the only cat who knows where it’s at. Everybody’s pickin’ up on that feline beat, ’cause everything else is obsolete.”

Those Disney fur-balls definitely know where it’s at!

The History Behind the Cats

There have been sightings going as far as 1955 soon after Disneyland opened.

The story goes: When Walt Disney decided that there should be an attraction inside the Sleeping Beauty Castle — what we know today as the Castle Walkthrough attraction — he brought engineers into the castle to begin the planning. But to his surprise, he was greeted by a feral cat colony that had made the castle their home.

But the cats had brought with them a huge problem — an infestation of fleas. Walt Disney knew he couldn’t just get rid of the cats without sparking public uproar, so he decided to adopt each cat and make them all Cast Members. By doing so, the problem seemed to be solved in the best possible way.

Unfortunately, things weren’t that simple. Due to the theme park’s rustic design, Disneyland had ironically brought in un-welcomed guests to the park — rodents. For Walt’s luck, not all feral cats had set home in the castle, but in other places around the park property. Those cats found their wonderland inside the park with a good source of food — the rodent population — plus, the park was a place free of the typical dangers that a stray cat faces. They would come out at night and hunt inside the park in peace.

At some point, someone at the Disney Company had a brilliant idea; allow the cats to live in the park. By nature, feral cats are scared of humans, therefore they wouldn’t bother the park’s guests, and apparently, they were doing a better job at pest control than human exterminators.

The idea worked so well, that the cat population at Disneyland still exists with over 200 felines! The kittens received a forever home at the happiest place on earth, and the theme park guests are always surprised and happy to spot one of the felines around the park. So, next time you are at Disneyland, keep an eye out for some whiskers, bushy fur tails and some major cuteness around.

Disneyland and the Cat’s Relationship

Right after deciding to keep the cats, the Disney Company established protocols and ways to keep the cats and guests safe. Disney placed feeding stations around the property, the cats where all spayed/neutered, vaccinated the entire feral population and Circle D Ranch casts members were assigned to the care for the furry batch of Disneyland cast members. The cats a very well taken care of at Disneyland!

For the most part, the cats stay hidden during the day and roam around at night. But, not all cats follow that rule. In fact, park guests often spot the feral cats sleeping around the park or wandering around the park property during the day. For that reason, and as general rule, Disney does not encourage guests to try to get too close, or even pet, the cats.They are better off remaining solitary, and admired from a distance. But, by all means, take some pictures!

If by any chance a Disneyland cat starts getting too comfortable around park guests, Disney adopts the feline out to a Disney cast member. The same goes for any new litter of kitten accidentally born within any Disney property. So, don’t encourage the cats to lose their permanent home inside the happiest place on earth.

If any of the Disneyland cats start to get too friendly around the park’s guests, or if a new cat litter is born, Disney made the decision to put them up for adoption to a Disney employee — So they are always part of the Disney family.

Where to see the Disneyland cats online?

And, as if it wasn’t enough that those cuties are roaming around the park, they also have their own Instagram, Twitter and Official webpage where people can keep up with the Disney feline world.

And if you venture to The Cats of Disneyland webpage, you can find the purrfile [profile] of some of the cats like Ned, Lucian, Buford, Francisco and many others.

Who is Francisco, and what is #FranciscoFriday?

Francisco is probably the park’s most famous, and easiest to spot cat! Francisco is a long-haired tortoiseshell most likely to be found around the Grizzly Peak across from Taste Pilot’s Grill at DCA.

Photos of Francisco dominate the Disneyland Cats Instagram page easily! And his pictures are amazing! Francisco actually seems to like his photoshoot sessions, and he poses for the camera quite a lot.

Disney’s most famous tortie cat is a star for sure, and like all famous celebrities around, Francisco is not excused from controversies. In December of 2019, the Disneyland Cats website made a blog post addressing the biggest dilemma surrounding Francisco: after all, is Francisco female or male?

That is a good question after all, since the huge majority of torties are female, but about 1 in 3,000 are male. But, the post did not answer the question. Instead it makes a point on why Francisco’s gender even matters. All Disneyland feral cats are spayed and neutered, so it doesn’t really matter, and as stated in the blog post:

“You might notice that we avoid gender-specific pronouns whenever writing about Francisco on our Instagram posts, but that’s as good as you’re going to get. #FranciscoFriday will live on without being changed and I know that Francisco would appreciate it if you’d stop commenting on his/her gender. You’re going to give him/her a complex.”

How to find a Cat

If you are planning on trying to spot a Disneyland cat around on your next park visit, there are some specific places you might want to check out. Spots close to the cat’s feeding station like the Hungry Bear Restaurant in Disneyland, Taste Pilot’s Grill at Disney California Adventureland, White Water Snacks at the Great Californian, Rose Court Garden at the Disneyland Hotel and the ditch that runs parallel to the path for the Mickey and Friends Tram are great places to start looking.

If you are looking to spot some of the most famous cats like Francisco, Ned and Lucian, there are specific areas around the park they tend to stay at.

The more times you visit the park, the higher the chances of you spotting one of the furry Disneyland hidden attractions around. This is one of the many times having an annual pass might come in handy.

So, what do you think of Disney’s furry friends? Have you ever seen any of the cats around Disneyland? And what Disney cat is your favorite? Let us know in the comments.