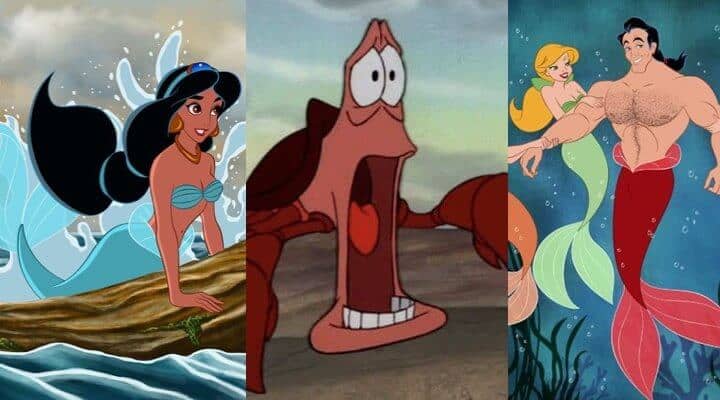 Every Disney Princess loves adventure, but only one wants to be part of your world. Who can forget the iconic Disney animation moment where Princess Ariel trades her voice and mermaid tail for a pair of legs with Ursula to get a chance at meeting Prince Eric.

Disney fan and artist Pedro Barrera clearly didn’t, as they decided to reimagine all of our favorite Disney Princesses in the iconic Little Mermaid pose, as if they’d made a reverse deal with the sea witch.

As huge Little Mermaid fans, it’s amazing to imagine the whole line up of the Disney Princess team hanging out under the sea with Ariel! Here are some of our highlights, but be sure to follow Pedro on Instagram at @fernl2606 to see the whole collection.

We all know that Disney is making the exceptional casting decision to introduce Halle Bailey, a young black woman as 2021’s Ariel in the upcoming live-action remake in a bold step towards normalizing diversity in movies. Though of course, she isn’t the first African-American Disney princess. That honor goes to Princess Tiana, who looks just fabulous as a mermaid, with her frog-inspired green tail and jewelry.

While we think Elsa looks beautiful as a mermaid princess (or queen?!), however, it does beg the question; how long is that water going to stay like that before it is frozen? We think Sebastian and the other critters of the big blue should watch out. Ice powers aside, Elsa really works as a mermaid; I’d totally watch this film.

How can the hero of China save her land as a fish? Mulan’s clearly taking some downtime away from her own movie to hang out and jam with a lobster to the music of Alan Menken. We love this piece of fan art; Pedro has really captured the little details of all the characters, and the magnolia in Mulan’s hair is no exception.

Moana’s relationship with the sea makes her a no-brainer for a mermaid transformation. We like to imagine a Disney animated feature that sees her team up with Ariel and a pool of other sea-base characters like Captain Jack Sparrow to slap evil with her mermaid tail. She could also try finding Nemo while she’s down there.

Umm, what? Gaston clearly loves the attention that his ripped merman bod is getting under the sea. We’re not sure how the rest of the ocean would feel about it, but hey; at least he’s out of Belle’s hair.

Which Mermaid princess was your favorite? Who do you think would work best under the sea? Let us know in the comments below.