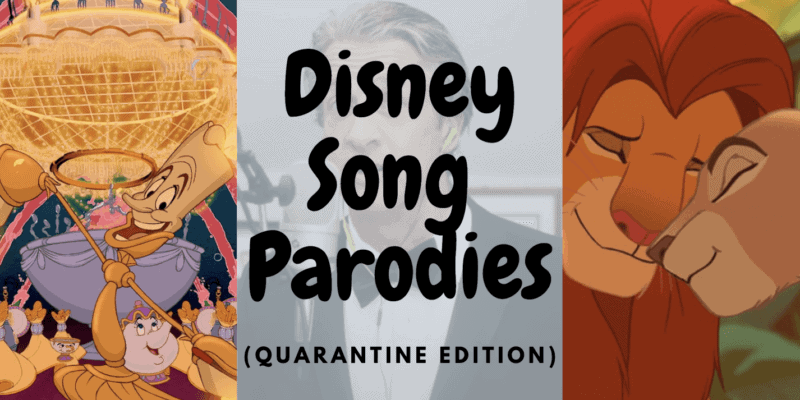 This hilarious video, created by The Holderness Family on YouTube, features some of your family’s favorite Disney tunes with brand new lyrics for this “stay at home” season of life.

Featuring the rewritten Disney lyrics on screen so you can sing too, the parody medley begins with “Wear a Mask” (Beauty and the Beast’s “Be Our Guest”). Lyrics include amusing lines like, “Wear…a…mask. You can craft one really fast. Tie a scarf around your neck. It’s what the CDC has asked.”

Later in the song, the audience will hear quarantine parody versions of Aladdin’s “A Whole New World,” which begins, “I can’t show you the world. But I can show you this bathroom. And the kitchen, the guestroom…”

The Lion King’s “Can You Feel the Love Tonight” is also featured, along with famous Disney songs from Moana and, of course, Tangled. It would be difficult to do a #StayHome Disney parody song medley without including the original quarantined princess, Rapunzel.

Which hilarious parody in this social media gem is your favorite?

If these hilarious Disney parodies get you in the mood to listen to actual Disney songs, this optimistic playlist featuring classic Disney animated film songs will bring a smile to your face and get you dancing!

For those who are spending quarantine working on their fitness, we’ve got all the Disney workout playlists you could possibly need! This HIIT playlist will help you burn any extra calories you’ve consumed while your local stay-at-home order is in effect. We’ve also got an inspiring Disney workout playlist that is perfect for whatever your exercise of choice happens to be.

Anyone who is missing the Disney Parks during their closure will appreciate this playlist that features music from Disney theme parks. See ya real soon, Disneyland and Disney World!