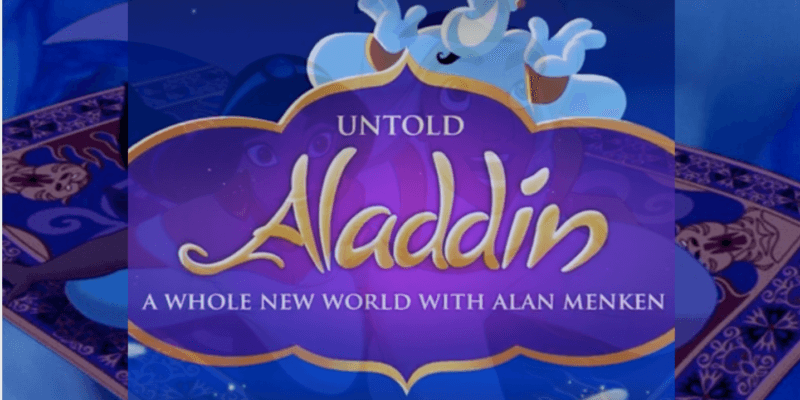 “I can show you the world, shining, shimmering, splendid…”

We know you’re already humming the rest! A Whole New World was originally written for the 1994 animated Aladdin film, and the song was featured again in the 2019 live action Aladdin remake. Whether you grew up on this song as a 90s Disney kid or you were a 90s parent who watched Jasmine, Aladdin, and Genie all day, every day, “A Whole New World” is undeniably one of Disney’s most popular songs.

Now, Oh My Disney has shared a fabulously fun video in which “A Whole New World” composer, the legendary Alan Menken, takes fans on a behind-the-scenes journey through the writing of the Aladdin hit song, which features the title character and Princess Jasmine.

It's A Whole New World like you've never heard it before! Alan Menken shares the enchanting untold story behind a Disney classic!

Titled “Untold Aladdin A Whole New World With Alan Menken,” the video showcases the famous Disney composer at a piano as he takes viewers through the process of writing “A Whole New World.”

Menken discusses how he woke up at 4 AM, inspired to write “something for the magic carpet” scene. His first line was “the world at my feet,” which didn’t make the final cut, but set the stage for the classic Disney song to be completed.

Menken goes on to talk about the “insane” success “A Whole New World” had after its release. In addition to being a Number 1 hit, it won both an Oscar and a Grammy Award!

What do you think about this story behind “A Whole New World” with Alan Menken? What other songs would you like to see the Disney songwriter share?

What is Alan Menken working on for Disney now?

In addition to being featured on last week’s Disney Family Singalong special, Menken recently finalized the score for the live action remake of The Little Mermaid and is reportedly working on a revival of last year’s Hercules pop-up production in New York City.

Other upcoming Alan Menken Disney projects include the score for Disenchanted, the long awaited sequel to Disney’s Enchanted, and the score and songs for the live-action remake of the 1996 Hunchback of Notre Dame movie.

Disenchanted will be sent directly to Disney+, the Walt Disney Company’s streaming platform. The live action take on Quasimodo and Esmeralda’s story was announced in January 2019, but few further details have been released. The Hunchback of Notre Dame will, however, presumably be a Disney theatrical release.