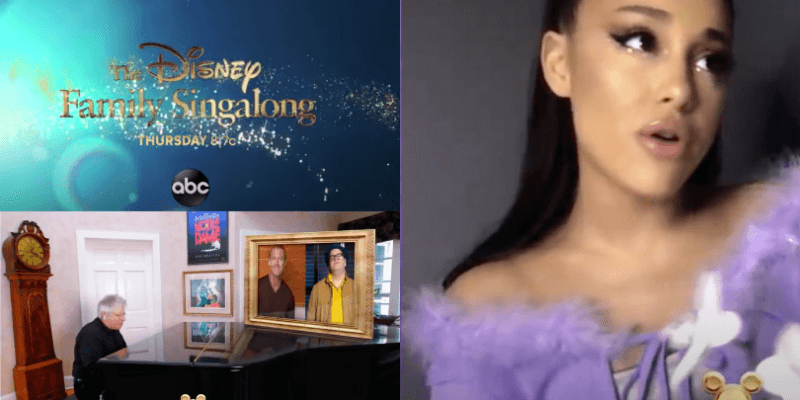 In case you missed the ABC Disney Family Sing-A-Long last night, it’s okay!  We’ve got you covered here.  Ryan Seacrest hosted the show from his home last night and today, we’ll do the same from our’s.  You can rewatch the full show on abc.com or Hulu, and you can even watch some of the performances on YouTube.

ABC has also posted some of the performances individually for your streaming pleasure.  We are going to do a recap below for you, if you want to fast forward to which sing-a-longs you want watch, or if you want to pick and choose to watch them separately at different times!  Let’s start the show, but first cue the opening of “Circle of Life.”

This one isn’t a performance.  She is actually helping us warm up our vocal chords. We need to do that, because we are about to sing at the top of our lungs and fill the room with joy!

Derek and Julianne Hough are best known for being former pros and judges on ABC’s Dancing with the Stars.  While we’re all singing along to “Be our Guest,” Derek and his girlfriend, Hayley, are treating us to a dancing treat is full Beauty and the Beast ballroom costume.  But it wouldn’t be Hough family event without his sister, who jumping in over FaceTime.  And of course, she has a Belle outfit as well!

Josh Groban: “You’ve Got a Friend in Me”

Josh Groban has such deep and comforting voice that just soothes us in this time knowing that we aren’t alone.  We are all friends in this time of need.  Grab your Toy Story buddies because this is a good one.

This four member country group made it so fun in their home kitchens.  It looks like everyone’s baking something with their rendition of “A Spoonful of Sugar” from Mary Poppins.  It soon becomes a family affair when their kids join in with them and it turns into a fun mess.

There was no surprise that Auli’i chose to sing her song from Moana.  It’s just as beautiful as when she originally sang it and it’s motivation for us to continue pushing through all this madness.

Beyonce: “When You Wish Upon a Star”

The show was partnering with Feeding America and they wanted to bring light to all the great things that Feeding America is doing.  Beyonce dedicated this song to all the healthcare workers who are tirelessly working to keep us healthy and safe.

Since this is a family event many of the stars are bringing their families into the mix.  Amber Riley was introduced by her niece, and you can easily see how much she looks up to her aunt.  She invites us to really get into the Frozen performance ourselves.

This one was such a blast and that’s because he wanted to do a song that isn’t done often from Jungle Book.  Some monkeying around happened for him in hopes we will too. Then he turned into a one man jungle band!

James Monroe Iglehart & Broadway Cast of Aladdin: “Friend Like Me”

This was quite a vocal styling!  Let’s be honest, it looked like a Zoom meeting, but unfortunately, I don’t think that’s what our Zoom meetings look like.  We all wish it did though!  Maybe this is the doing of Aladdin and his genie.

This mega popular pop start wanted to sing her favorite song from Hercules and we’re here for it!  She was introduced in by the beautiful Ellie Fanning.

Bobby Bones, Erin Andrews, and Carrie Ann Inaba all sang and danced in the best jungle animal gear.  Definitely makes us want to find one of those onesies.

Alan Manken is responsible for writing the music many Disney hits. It’s an honor to have him join the hilarious Josh Gad, and hunky Luke Evans for this performance from the live action Beauty and the Beast.  Both actors sing their respective parts from the movie!

Donnie Osmond: “I’ll Make a Man Out of You”

This is one of sweetest moments of the whole show!  Donnie Osmond is the singer of the original, “I’ll Make a Man Out of You” from the movie Mulan.  He starts off singing the song on his own then is joined by all his grandkids which I’m pretty sure just made us all melt!

Christina Aguilera: “Can You Feel The Love Tonight?”

With her dog on her lap, Christina Aguilera sings this romantic song from The Lion King. Her dog looks so calm and relaxed and we all wish we could join her on her couch too!

Jordan Fisher: “Under the Sea”

Jordan Fisher has such a fun voice for this song, and he brings in some friends to join him.  Many of them are holding signs thanking essential workers and it is super heartwarming.

Torri Kelly: “Colors of the Wind”

This ballad is not an easy one to sing and she’s so on point is it!  It shows off how beautiful the world is no matter what.

We’ve all seen John Stamos singing this on social media and it’s back!  Though, we’re all wondering how he got a Dumbo ride in his house and an “It’s a Small World” character doll.  Can we get that in our house too?

Thomas Rhett: “Do You Want to Build a Snowman?”

He sings this with his daughters, but when he asks them for a solo, they get shy.  It’s super cute especially with the way they make it snow on their porch.

High School Musical Cast: “We’re All in This Together”

Oh this the message that’s going around strong right now.  Unfortunately, Zac Efron couldn’t join in for the singing, which upset some fans.  Many of the other cast members did though and we’re surprised they still remember the dance moves.  They were joined by some of the Descendants cast and it’s one big party!

Michael Buble and Demi Lovato: “A Dream is a Wish Your Heart Makes”

Split into two parts of this song, Michael and Demi both did a great job in closing out the show.  We are all dreaming and wishing that the world will be back to normal soon and it hits all the feels.

We hope you enjoy this sing-a-long with your family!  It was everything we needed and more!