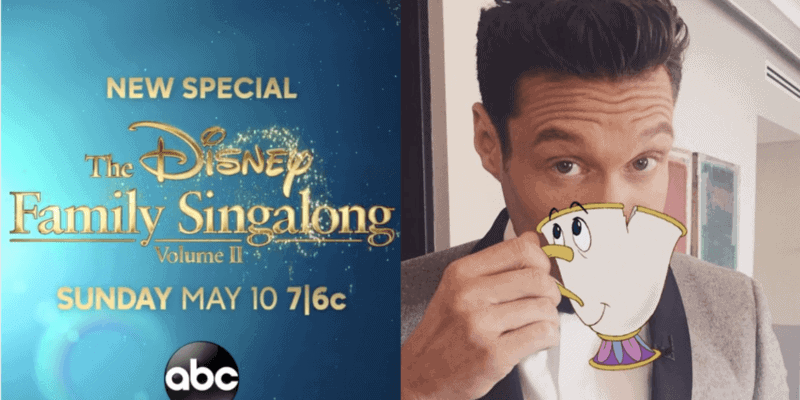 This morning, Ryan Seacrest took to Instagram to announce that there will be a second edition of the super popular Disney Family Singalong on ABC!

More #DisneyFamilySingalong magic is coming and just in time for Mother’s Day! Join me for Volume II with even more stars singing your favorite Disney tunes. We’ll see you May 10 at 7|6c on ABC!‬

In his social media post, Seacrest stated “More #DisneyFamilySingalong magic is coming and just in time for Mother’s Day! Join me for Volume II with even more stars singing your favorite Disney tunes. We’ll see you May 10 at 7|6c on ABC!”

The first Disney songs special featured everyone from Beyonce to the High School Musical cast to Ariana Grande to Josh Gad and Luke Edwards to composer Alan Menken. We can’t wait to see what other magic is in store in May!

Get ready for the #DisneyFamilySingalong: Volume II! More stars, new songs, and plenty of Disney magic! ? Sunday, May 10 on ABC.

We’re sure to hear lots of Disney classics that weren’t featured in the first singalong special as host Ryan Seacrest guides us through another edition of ABC’s Disney Family Singalong!

In addition to the popularity of the Disney Family Singalong spectacular (which is now streaming on Disney Plus!), Disney fans have gotten to enjoy all sorts of other special musical performances of their favorite Disney songs lately.

Susan Egan, the original Broadway Belle and the voice of Megara in Hercules, is the most recent Disney celebrity to join in the fun. She performed “I Won’t Say (I’m In Love)” with a little help from a Hercules bust, a chorus of muses, and her family’s collection of Disney stuffed animals!

Which celebrities are you hoping to see in the Disney Family Singalong 2? We’ve got our fingers crossed for an appearance by Idina Menzel!