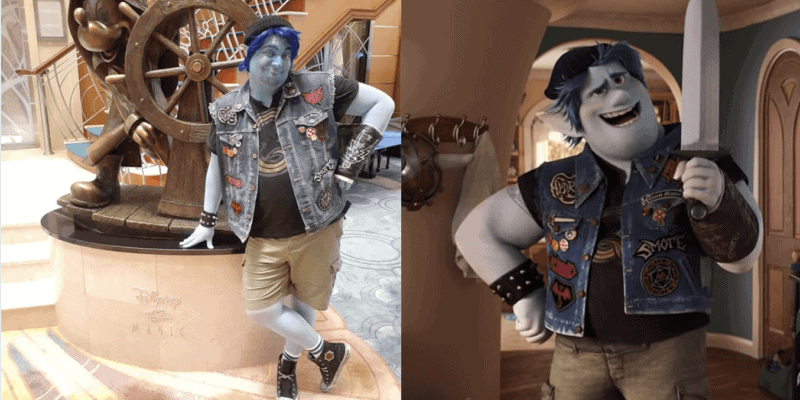 When you’re quarantined on-board a Disney Cruise Line ship, you can bet that there will be some fun along the way.  Crew members who are currently in isolation on the Disney Magic are showing some love for Pixar’s latest venture, Onward, with a particularly impressive Barley cosplay.

Cast Member Mike Patierno, a Disney Cruise Line costume technician, pulled-off the impressive Barley Lightfoot cosplay in the atrium lobby of the Disney ship. If you have yet to see Onward, it is now streaming on Disney+ and offers a touching story that will alternately have you crying tears of laughter and heartache.

DCL’s very own Barley clearly had a blast hanging out with other members of the crew, including Goofy and his son, Max, who are currently celebrating the 25th anniversary of A Goofy Movie.

Barley’s brother, Ian, seems to have missed out on the festivities. He may be questing for another Phoenix gem with members of the Disney Cruise Line crew.

If you have to be quarantined, Disney Cruise Line cruise ship looks like a pretty enjoyable place to be. It’s important to look on the bright side during this challenging time (especially for the cruise industry) and we commend the DCL crew for doing their part to keep Disney magic alive!

When the Disney Wonder docked in San Diego on March 19, it was initially reported that no one on-board was showing symptoms of COVID-19. Now, however, 38 crew members from the Disney Wonder have tested positive for the virus. One of the Wonder’s passengers also has the novel coronavirus.

As per Cruise Line News, on April 4 the Disney Wonder’s captain confirmed that 38 crew members had tested positive for the coronavirus. No other Disney cruise ships were impacted by coronavirus cases.

If you are interested in learning more about a cruise credit or booking a future cruise, contact Disney Cruise Line directly.

The team is in close contact with health officials to ensure that every DCL port is safe before cruise ship passengers are once again allowed to disembark.

Our thoughts and well wishes are with the entire quarantined Disney Cruise Line family during this time! The ITM team can’t wait to be back on the high seas with you very soon.

Comments Off on Disney Cruise Line Crew Presses “Onward” While Quarantined On Board!