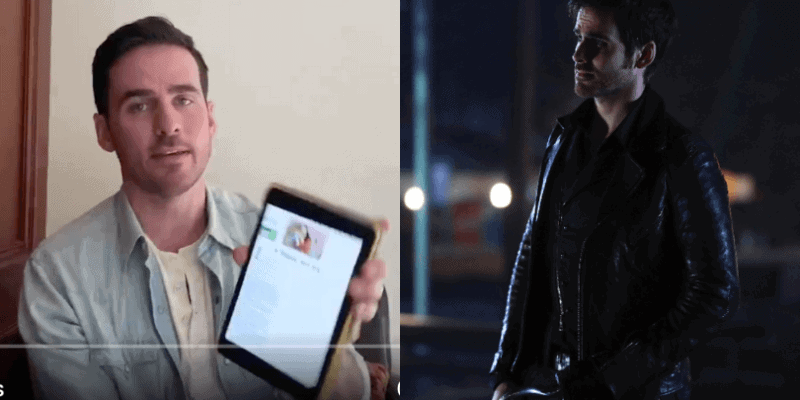 One of Disney’s latest tweets is a video of Colin O’Donoghue reading a story.  It’s the perfect way to celebrate World Book Day!  If you haven’t grabbed a book to read yet today, grab your cup of coffee or tea, and have one read to you.  It’s easy to open up your Twitter app for a moment and take yourself to a whole new place right from home.

If you aren’t familiar with Colin O’Donoghue, he plays Killian, aka Captain Hook, in the TV series Once Upon a Time.  He’s the charming version of Captain Hook that has stolen our hearts from scene to scene. We’re excited for the day that Once Upon a Time comes to Disney+.

Colin O’Donoghue is reading “A “Snappy” New Ship” from 365 Bedtime Stories which is story about Captain Hook and Smee.  He starts by saying how great it is to connect over a good story which he will be reading this one from his home where we all are, in which he clarifies our own homes, not in his.  I mean we’d all love to be there, but that just made us laugh out loud for sure.  He’s got a great narrative voice especially with his Irish accent.

Disney has released quite a number of their stars reading stories to us including one of Colin O’Donoghue’s Once Upon a Time costars Ginnifer Goodwin.  Ginnifer Goodwin is the actress responsible for Snow White in this TV series.  She’s also the star of Zootopia in which she brings Judy Hopps to life.  It’s only fitting that she would be reading Disney’s Judy Hopps and the Missing Jumbo-Pop.

Everybunny gather ‘round for a Zootopia tale! Join Ginnifer Goodwin for a reading of “Judy Hopps and the Missing Jumbo-Pop.” #DisneyMagicMoments pic.twitter.com/QBL7e7fE0W

Some other notable Disney stars who have read stories to us as of late are Daisy Ridley, who is Rey from the newest Star Wars trilogy reading BB-8 on the Run.  Auli’i Cravalho, Moana herself, reads Moana and the Ocean.  Joonas Suotamo, our lovable wookie, Chewbacca, reading Star Wars: Chewie & the Porgs.  All of these stories feels like we have a friend reading to us, and these stars are right that we can all bond over a good book.

Comments Off on Celebrate World Book Day with Colin O’Donoghue, Hook in “Once Upon a Time”!