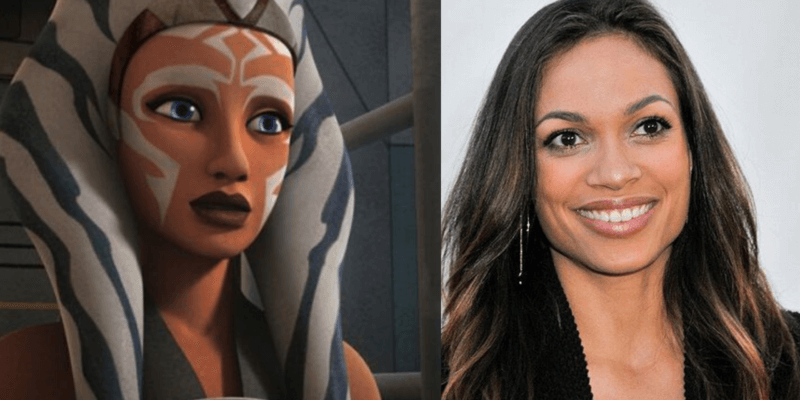 The longstanding rumors of Disney casting Rosario Dawson as Jedi Ashoka Tano came true last week when it was announced she would be joining the cast on season two of The Mandalorian. Whether you disagree with the casting choice or not (some fans are angered that Ashley Eckstein wasn’t cast for the role) it seems Disney is banking on Rosario delivering a solid performance in season two of the popular Star Wars show.

Rosario Dawson is an established actor

With such a well-known actor taking the role on, we think it’s very unlikely that Disney is going to only include her in a couple of episodes of The Mandalorian. This is no doubt going to be a long game hiring for Disney who is looking for someone to do the beloved character justice in the long term.

Though not working directly with the Disney+ team, Rosario has a past with Disney, having worked on the Marvel shows Daredevil, Luke Cage, Defenders, and Jessica Jones. She’s got a lot of acting credits to her name and it would seem almost senseless for Disney to cast her as an extra for a couple of episodes.

The Mandalorian isn’t about Ahsoka

The clue is in the name, The Mandalorian isn’t about Ahsoka and while the first season has primarily focussed on Mando and his relationship with “The Child” (a.k.a. Baby Yoda), we can’t see the same storyline continuing for many more seasons. It would make a lot of sense for Mando to hand over The Child to Ahsoka and her series pick-up from there.

Obviously none of this is confirmed, but people want to see more of the Mandalorian and while the addition of Ahsoka would work wonders for an episode or two, she shouldn’t become the focus for his story. There’s no doubt that Jon Favreau, Dave Filoni and the rest of the team at Lucasfilm are making sure that the right level of attention is given to Ahsoka moving forwards. After all, we want the show to focus on the Bounty Hunter and the clan over the Jedi!

The fandom is there

Many of us are still gutted that Eckstein isn’t reprising her role (pictured above) but we’re also excited for what Dawson is sure to bring to the part.

Since debuting in The Clone Wars animated series, Ahsoka Tano has shot to the top of many fans lists of favorite characters. If Disney announced a dedicated series there is almost no doubt that it will do incredibly well on Disney+. We suspect Disney will wait to see how fans judge the appearance in The Mandalorian before publicly committing to a series but we also have no doubt that plans are in place should the reaction be positive.

Would you watch an Ahsoka Tano dedicated series on Disney+? Let us know in the comments below!