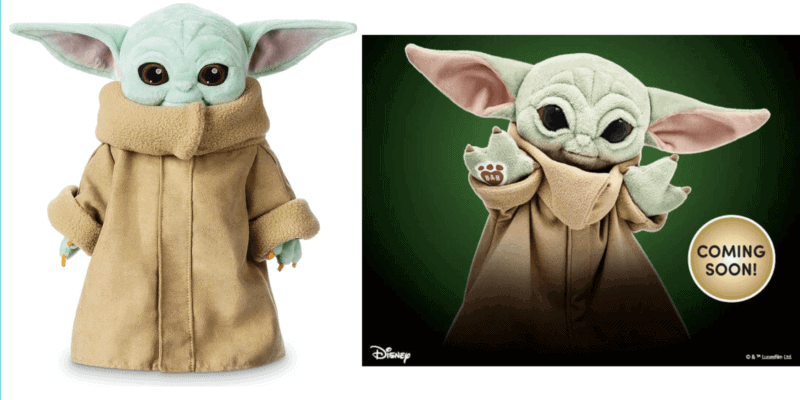 From November 12, 2019, when the first episode of The Mandalorian series hit Disney+, this surprise breakout character has taken the world by storm! You have seen memes of it all over social media, and people from the ages of baby to adult have fallen in love with this cute little green creature. The Child, a.k.a. Baby Yoda, has stolen the hearts of many with its adorable personality. Even Mando‘s cold hearted persona is continually warmed with each episode that goes by.

Over this past holiday season, many of us expected Disney to launch The Mandalorian merchandise, specifically a Baby Yoda plush toy. Many of the Disney streaming service viewers thought they would have their hands on the latest and greatest plush

As weeks went on, it didn’t seem like the force was with us. Not only did we not have a Baby Yoda plush, but we didn’t have any Mandalorian merchandise at all for a while. Maybe it was due to the opening of the final movie in the Star Wars trilogy, The Rise of Skywalker. Some park goers even headed into Star Wars: Galaxy’s Edge inside the Disney parks to purchase the mini original Yoda in hopes to make their children happy for the holiday season.

The Mandalorian merchandise finally did make it into the parks. Though there was Baby Yoda merchandise out throughout some of the stores in the parks, there still was no official The Child plush. This was starting to worry some of the series character fans, some even starting to get a little annoyed by it. We wondered, are we ever going to get a Baby Yoda character plush?  Even Scentsy is capitalizing on this popular character!

Well fans of Baby Yoda, the force is strong now! We are finally getting the plush! Not only are we in pre-order on shopDisney for The Child plush, which becomes available by June 1st, but Build-A-Bear revealed that their Baby Yoda plush will arrive in stores soon. Will we possibly get the Build-A-Bear version even sooner than the official Disney one? It’s really hard to say as Coronavirus could be disrupting the supply chain.

The Build-A-Bear Baby Yoda shows off his force for sure! It truly has that aww… factor that has fans doing the same from the series. From the photo, you can see Baby Yoda‘s iconic hand motion using the force. With Build-A-Bear, you do have the ability to control how soft or stiff you want you plush, but the Disney one is set. It does look like the material is soft on the Disney plush, but it may be a stiffer version. The Build-A-Bear version may just be overall more cuddly.

Either way, I know we’re all hoping to be cuddling with one of them on the couch watching season 2 of The Mandalorian.