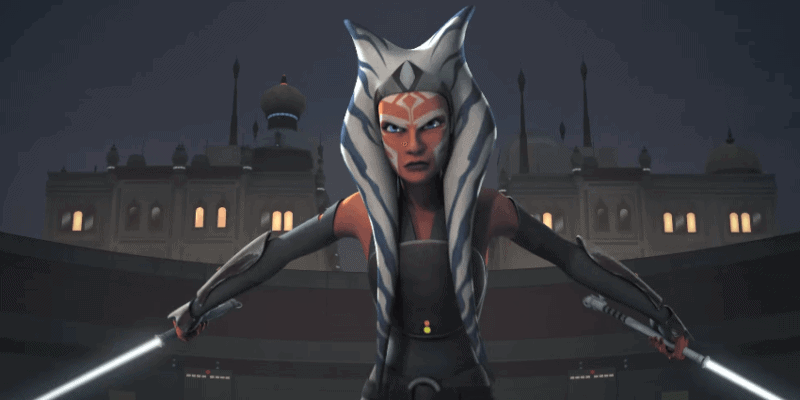 If there weren’t enough Easter Eggs teased for Star Wars: The Rise of Skywalker, we just got teased of another one. Director J.J. Abrams teased that fan-favorite Star Wars Character Ahsoka Tano will have some sort of appearance.

In an interview with the Japanese Site, Sonora News 24, Star Wars director J.J. Abrams left with a statement that has caused the internet to erupt with excitement!

Okay, time-out! Let’s Break This Down

Let’s be nice and give less-intense fans a moment to catch up folks. Ahsoka Tano was Anakin Skywalker’s Padawan. Yes, Darth Vader has a Padawan before he went to the Dark Side.

We meet Ahsoka Tano in the animated Canon TV Series, Star Wars: Clone Wars which covers the latter half of the space between Episode II and Episode III. So, this is after Anakin has completed his training and become a full Jedi Knight.

Ahsoka learns a lot throughout the series, goes on to wield two sabers, and become a fan-favorite. But in the show, she is wrongfully charged with crimes against the Jedi Order. While she was acquitted, Ahsoka felt betrayed and lost all trust in the system. She leaves the Jedi Order.

We don’t see Ahsoka again until Star Wars: Rebels, another animated series that takes place between Episode III and Episode IV. We find her grown-up, and still a Jedi in every other way but name. Her powers have grown exponentially, and we see her wield two white lightsabers.

Long story short, Ahsoka comes face to face with Darth Vader, recognizing it to be her old master. But right as Vader delivered his final blow, Ahsoka is pulled out of the confrontation through a convenient interdimensional portal that a fellow Rebels character was able to unlock.

Canon–a.k.a. the storyline that matters–recognizes that thanks to that portal move, Ahsoka was able to survive past Return of the Jedi into the Age of Resistance.

When the J.J. Abrams comments were released, the internet freaked out. So much so that tweets were issues to tell people to calm down.

Before everyone gets too excited, please read the article. Most likely this is going to be just an Easter egg and we won't even notice her in our first viewing. We can only hope for more. Mr. "Mystery Box" JJ Abrams revealed that publicly, so I am sure there is a reason for that. https://t.co/2eFWf8JsAE

Reminder to our Twitter followers. We try to put as many specifics in our headlines as possible. With that said, we recommend reading the articles we link at the bottom of our tweets to absorb the full spectrum/content of each report and editorial we share. Thank you!

Still, it’s hard not to get excited about seeing this character finally make it into a live-action film.

When asked about this news, one anonymous Ahsoka fan remains skeptic but you won’t find her complaining either if Ahsoka shows up. “I mean, I love Ahsoka so I’m never opposed to seeing her on any screen,” she explained. “[It] could be interesting to see how they build another connection to her in the larger Star Wars Universe. It would also be cool if we got to see her interacting with Luke or Ben, the son and grandson of her master.”

Well, if nothing else is said on this matter, we will all find out for ourselves when Star Wars: The Rise of Skywalker opens in theaters on December 20.

What do you think? How do you think they could work Ahsoka into this? Are you an Ahsoka fan? Let us know in the comments!