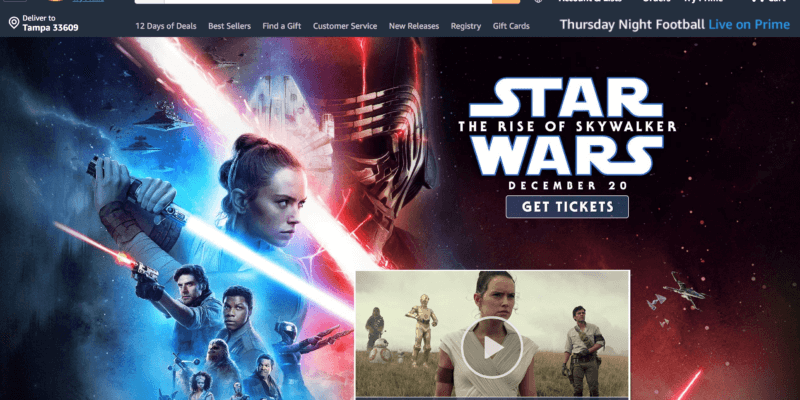 In partnership with Disney and Lucasfilm, Amazon has just released an exclusive behind-the-scenes video of Star Wars: The Rise of Skywalker.

This not-so-secret interactive campaign is the latest in an epic series of promotional videos and tours made for the final installment of the Skywalker Saga.

Amazon’s landing page includes the 2-minute video, but also two links. One will take you to Fandango’s website so you can buy your tickets to see Star Wars: The Rise of Skywalker and the other will take you to an Amazon page filled with Star Wars merchandise including Baby Yoda plush dolls!

Without giving too much away, the video itself is a montage of clips from behind the scenes as well as the movie. Yes, that includes new clips we haven’t seen yet. It also includes more clips from the cast interviews for The Return of the Jedi paralleled with clips from the upcoming movie. Specifically with Mark Hamill (Luke Skywalker) and Anthony Daniels (C-3PO). JJ Abrams speaks a great deal as well on the challenges and the emotions behind sufficiently bringing this saga to a close.

Star Wars: The Rise of Skywalker is the final chapter of a saga that includes eight other “episodes” two “Star Wars Stories” four TV shows, and countless shorts. Early estimates predict the film to have a box office opening weekend of close to $200 Million. Although, we have some reasons why it might break $200 Million when the time comes.

Star Wars: The Rise of Skywalker arrives in Theaters December 20, 2019.

Are you excited for The Rise of Skywalker? How are you celebrating the conclusion of the Skywalker Saga? Let us know in the comments!

Comments Off on Amazon shares exclusive “Star Wars: The Rise of Skywalker” video