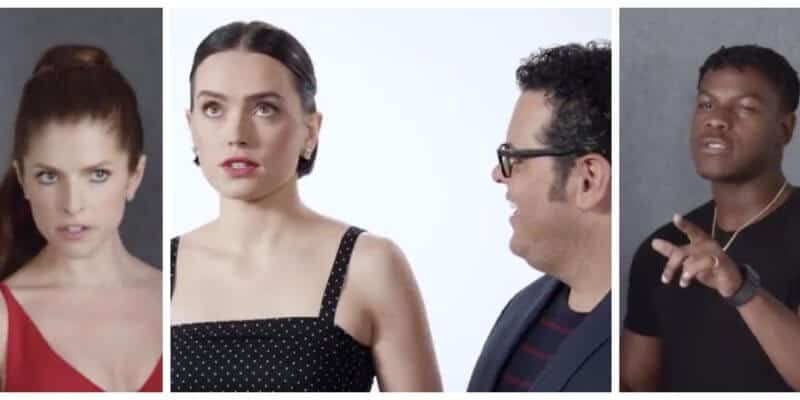 The Rise of Skywalker is so close, and we’re building up our Midichlorian count while we wait. But that doesn’t mean we’re not chomping at the bit for solutions to all our unanswered questions. Spoilers? I don’t always want them, but my desires are burning, so Imma go ahead and let Josh Gad irritate Daisy Ridley for Star Wars Spoilers and giggle the whole time! Go get her, Josh! (But also, in case you DON’T want spoilers, don’t worry… she doesn’t crack!)

When Star Wars: The Force Awakens premiered, we were immediately curious about Rey’s parentage. Even with the second installment of the series, we were not given any more answers. Our queries grew! Fans across the galaxies have been wondering if the final film in the Skywalker saga will answer that question. We all want to know! But what lengths will we go to in order to get that information?

Josh Gad recently uploaded a video onto Twitter showing himself and several others he’s recruited working to harass Ridley into giving them answers. Tons of stars from all sorts of projects show up to help Josh, from Marvel’s The Eternals, and WandaVision, to Lucasfilm’s Rogue One series, our favorite: The Mandalorian, and casts from Pixar’s animated Toy Story 4, Soul, and Disney’s Frozen 2 and Noelle (put that phone away, Anna Kendrick!) You’ll even see a surprise appearance by John Boyega, who may know more than he lets on as Josh Gad Irritates Daisy Ridley for Star Wars Spoilers.

Bombarding her with questions, suggestions, pitch ideas and even confusing her, Daisy doesn’t crack. She doesn’t budge. She reveals nothing! But we’re highly entertained by all the antics!

I LITERALLY TRIED EVERYTHING. The Force is strong with Daisy Ridley. #TheRiseofSkywalker pic.twitter.com/3foFwShPL1

One thing we’re really happy about is that we only have to continue to irritate Daisy for a few more days since Star Wars: The Rise of Skywalker‘s opening is just over a week away on December 20th, 2019. We’ll all have answers soon.

Now, who do you think Rey’s parents are? Leave a comment and tell us what you think!