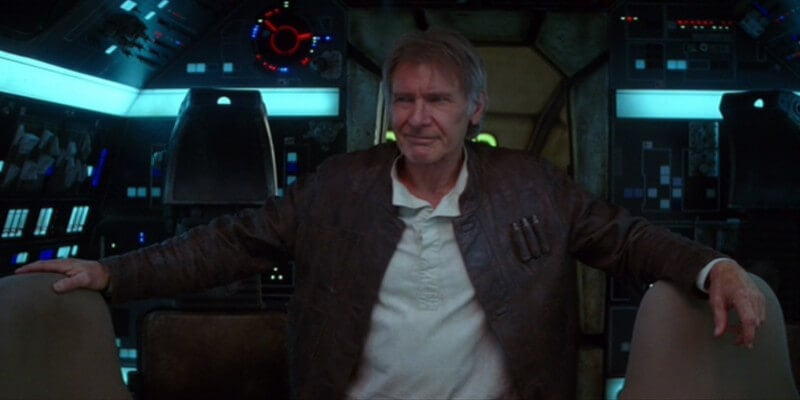 As a pretty big Star Wars fan, I feel very lucky to have this job. Back in December I got to see “Star Wars: The Force Awakens” a few days before its public release and this week I received an advance review copy of the movie on Blu-ray. I realize this is the geek-cred version of a humblebrag (or is it just a brag?) but when it comes to my newfound professional relationship with Star Wars I have no shame about being boastful. Watching “The Force Awakens” again in the comfort of my own home has further solidified my opinion that Episode VII is the Star Wars movie we needed right now. A week or so after the theatrical opening I tweeted a joke about how, despite my own prior criticisms to the contrary, this movie actually has more in common with the 2011 Jason Segel-penned “The Muppets” reboot than the original “Star Wars.”

Think about it, though… we’re reintroduced to all the beloved characters through the eyes of a newcomer, but everyone’s mopey and the group has drifted apart, and then the team has to reunite to stop an evil plan to destroy the Muppet Theater. It all makes sense. Well, everything but that last part. But seriously, “The Force Awakens” holds up really well, and I say that having seen it a few times now. This was around a similar period when it started to dawn on me how much I really disliked “The Phantom Menace” back in 1999, so I know my opinion isn’t tainted by the movie simply having that famous music and title crawl at the beginning.

And ultimately I’m finding myself able to look past the comparisons to “A New Hope.” Sure, if I had my way I probably wouldn’t have included yet another Death Star (Starkiller Base, whatever) and I maybe would have had Rey grow up on something other than a desert planet, like in some of the unused concept art I’ve seen. But overall, if director/co-writer J.J. Abrams borrowed a little too much from Episode IV, at least he also remembered to borrow the idea that Star Wars should have likable characters and humor that works. Anyway, you know the movie is good. You’ve seen it. How about the home video release? Let’s take a look at what’s included in the set, shall we?

Also included in the box is a DVD copy of the movie, which of course is presented in a lower resolution than the Blu-ray, but it’s useful if you want to lend the movie to your less tech-savvy friends or let your children watch it in the car. And you get to download a HD digital copy to play on mobile devices, a process that I’ve personally always found to be more trouble than it’s worth. But I’m an old man who likes big-screen TVs and physical media. The only real disappointment about this release is the lack of an audio commentary. As a student of film and a fan of the movie-making process in general, I’ve always felt this should come standard, especially with such a high-interest product. Heck, even George Lucas and his team managed to cobble together commentaries for both the prequels and the original trilogy when they made their home video debuts, though those were edited from individual audio interviews.

Still, I would have loved to hear Abrams, co-writer Lawrence Kasdan, producer Kathleen Kennedy, and as many members of the cast as possible chat about their scene-specific experiences making the movie for a couple hours while watching the images in question fly by on the screen. Unfortunately that’s not an option on this version.

We do, however, have a bonus disc with a series of featurettes of varying lengths and interest. Here’s a breakdown of what you can expect:

Secrets of The Force Awakens: A Cinematic Journey

The main event of the bonus disc is this in-depth 70-minute documentary, divided into four chapters, which combines scores of behind-the-scenes footage with interviews of all the expected players. If you were paying close attention during the production and promotional campaign last year there’s probably not a lot here you haven’t heard before, but it’s nice to have it all in one place and there are some intriguing tidbits here and there. It is odd that nobody mentions Harrison Ford’s leg even once.

The Story Awakens: The Table Read

A short, four-minute piece about the first time the cast and creative team got together to read “The Force Awakens” screenplay out loud in its entirety. It’s cool to watch some of the actors’ reactions to certain things, and very funny that Mark Hamill was relegated to reading the stage direction.

I’ve loved animatronic creature effects in movies since I was a kid, so this nine-minute featurette was right up my alley. We’re given a tour of Maz Kanata’s castle and meet many of the realistic-looking aliens who inhabit it. The only problem with featuring the practical, on-set effects work in such a manner is that it highlights the difference between animatronics and the less-convincing (to me) CGI-only characters in the movie.

This six-minute piece was one of my favorite featurettes on the disc, simply because it contained a lot of production footage I hadn’t seen before. I think fans will be very interested to learn how many different versions of the physical BB-8 puppet were crafted for the movie, and how they worked. The side-by-side comparison footage of the performers on set next to the final movie is of particular interest.

Blueprint of a Battle: The Snow Fight

This is another really fascinating piece, clocking in at about seven minutes, which focuses on one scene: the final lightsaber fight between Kylo Ren, Finn, and Rey. It’s amazing how the entire forest set was built on a soundstage. Watching the construction in progress as well as the stunt-choreography training necessary to prepare the actors makes you appreciate the terrific climactic battle even more.

ILM: The Visual Magic of the Force

An eight-minute look at the George Lucas-founded special effects company Industrial Light and Magic, and their contributions to “The Force Awakens.” I thought I would be disinterested in seeing effects created mostly using computers, but it’s fairly impressive to see the variety of techniques that were utilized in bringing the world of the movie to life.

Another seven-minute featurette, this one commemorating legendary composer and conductor John Williams and his ongoing collaboration with Lucasfilm. The man is obviously a genius, and a god to anyone who grew up with the blockbuster movies of the 70s and 80s. It’s great to hear his thoughts and continued enthusiasm about being a part of Star Wars history.

I take back what I said earlier: I might count this as another disappointment. All the scenes presented here are very short and, it should probably have gone without saying, fairly disposable. There wasn’t a single one of these I watched and didn’t immediately understand why it wound up on the cutting room floor. And even more disappointingly, there was a deleted scene advertised in the teaser for the home video release (Han Solo asking Maz Kanata how to escape her castle’s destruction) that is not present on the disc.

A three-and-a-half minute tribute to Lucasfilm’s worthwhile charity, which raised millions of dollars for children’s healthcare and education during the production and release of “The Force Awakens.”

Look, if you’re a “Star Wars” fan and you enjoyed “The Force Awakens” as much as I did (or more,) you’re going to want to own this Blu-ray set. Knowing Lucasfilm’s history with home video releases, this will likely not be the final, definitive release, but if you want constant, unfettered high-quality access to Episode VII as we begin the build-up to the next few Star Wars movies, this set is unquestionably a must-have.

“Star Wars: The Force Awakens” is available for digital download today, and on Blu-ray beginning this Tuesday, April 5th.