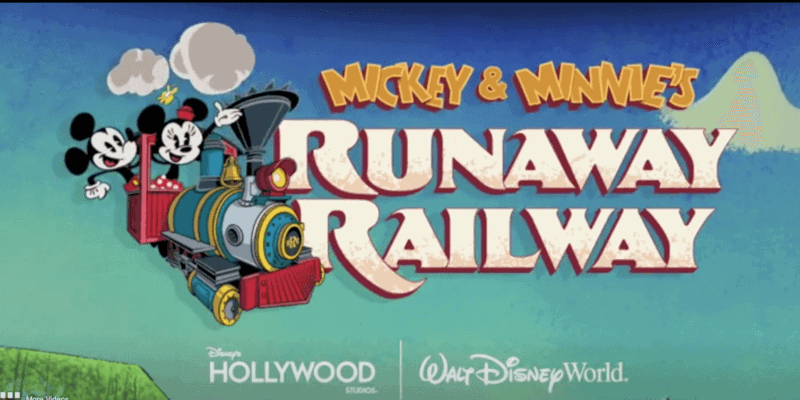 It took 91 years, but Mickey Mouse finally got himself a ride-through Disney attraction. Mickey and Minnie’s Runaway Railway opens at Disney’s Hollywood Studios in Orlando, Florida tomorrow! Inside the Magic got an early media sneak peek today, and we can say without a doubt Disney made it worth the wait.

Inside the Magic’s Emille Crawford and Kurt Schmidt were on-scene to take the ride for a spin and share some sneak peeks along the way. Check it out in the video below:

Tomorrow morning, everyone will have the chance to board an autonomous trackless ride that completely immerses you into the world of Disney’s Fab Five (Mickey Mouse, Minnie Mouse, Donald Duck, Goofy, and Pluto) and the latest Mickey Mouse cartoon, “The Perfect Picnic.” And we cannot wait!

As far as who can ride this, Walt Disney Imagineers knew Mickey and Minnie would want their ride to be accessible to everyone! There is no age or height requirements to enjoy this ride, and it’s not scary at all.

But don’t just take our word for it. Click here to hear some first reactions from the Cast Members who already got their own preview.

Mickey Mouse: 91 Years Without a Ride

Mickey Mouse first appeared on the silver screen in the silent short, Plane Crazy with Minnie Mouse and then later in the first animated cartoon with sound, Steamboat Willie in 1928. Walt always said, “I hope we never lose sight of one thing: that it was all started by a mouse.” But beyond some shows and character meet ‘n greets, that mouse was left out when it came to new ride-through attractions since Disneyland opened in 1955. Even though, Plane Crazy would’ve made an awesome roller coaster — but I digress.

The same abstinence was carried over to Magic Kingdom Park at Walt Disney World in 1971, and the tradition continued to every Disney theme park around the world. Until now. Mickey and Minnie’s Runaway Railway is bound to be an instant classic at Walt Disney World loved by any guest who loves the Mickey Mouse cartoons.dis

The ride will be added to Disneyland Park in Anaheim, California in 2022.

Related: Here’s Why Mickey and Minnie Have Never Had a Ride at a Disney Park

Come Ride Mickey and Minnie’s Runaway Railway for Yourself!

Want to go ride Mickey and Minnie’s first ride? Our friends at Academy Travel are standing by ready to help make it happen. Back with years of experience, they know what it takes to get you the best possible deal on your next Walt Disney World vacation. Click here to learn more and receive your free, no-obligation quote today!