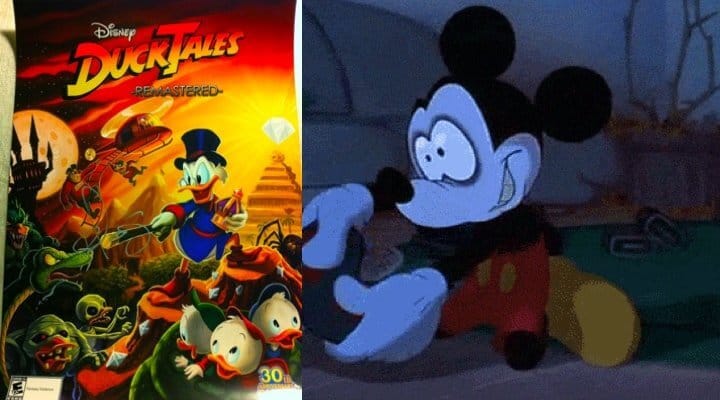 So as well know, the coronavirus is making it extremely difficult to get our healthy dose of Walt Disney magic. With the parks closed and our favorite movies getting pushed back, what’s there to do? I mean other than Disney Plus. Well, in addition to the Disney themed Zumba classes, recipes, and even ambient work playlists we’ve given you to pass the time, how about video games? There are many, many hundreds of Disney video games out there across a multitude of consoles, so I’ve had to be brutal, and only pick my absolute favorites.

So without further ado, please enjoy some of the best games out there based on the magical worlds of Walt Disney. Whether you’re a retro player, or you love more recent Disney video games, we’ve got you covered. From The Lion King to Epic Mickey, let’s dive in.

Now, as a rule, tie-in games for movies and tv don’t tend to be all that great. However, in a shocking amount of cases Disney, as always, proved that it was the exception to the rule. One such example is Ducktales, often regarded as one of the best games the Nintendo Entertainment System had to offer. GamesRadar even crowned it the 16th best NES game of all time. With a catalog of 715, that’s pretty banging. The game is known not just for stellar platforming gameplay, but also its rockin’ soundtrack, especially on the moon level. It gets my inner gaming nerd going every time.

You can find Ducktales as part of the Disney Afternoon Collection available for download on PC, Playstation 4 or Xbox One. There was also a remastered edition during the last generation of consoles, and it has recently been listed on multiple mobile platforms for download. As the theme song says, ‘whoo-oo!’

An absolute classic in gaming adaptations if there ever was one. Infamously hard and for darn good reason, The Lion King is one of the most deceptively brutal platformers out there. Don’t let its cute looks and excellent 16-bit rendering of the iconic soundtrack fool you, this is one hard game. Taking you through Simba’s journey (with some liberties taken to lengthen it out) this game will push you to your absolute limit, but it’s so darn charming that you can’t help but come back for more.

If your Genesis or SNES isn’t working anymore, don’t worry about it! The Lion King (along with fellow awesome platformer Aladdin) was recently released to download on Nintendo Switch, Xbox One, Playstation 4 and Windows. Oh, I just can’t wait to be king of this game.

Perhaps a rogue choice, but I’ve always had a soft spot for Epic Mickey. This brave rebrand of the Mouse as an edge-lord hero puts an emphasis on his more mischievous, adventurous side. Using his magic paintbrush, you have to make your way through various magical lands, after you accidentally damage the world created by Yen Sid (aka the sorcerer from Fantasia). The game is also notable for incorporating a then recently reacquired Oswald the Lucky Rabbit.

Sadly, due to the lackluster commercial viability of this forgotten gem, it’s not been ported to any modern consoles. If you want it, you’ll have to dig up your old Nintendo Wii. But hey, it sold 101.6 million units, so there’s a good chance you own one.

The best movie series based on a ride ever (so far, that is) also happens to make a pretty darn good game. There are countless LEGO titles to choose from, but if you ask me, there is none better than the adventures of Jack Sparrow and friends. Sorry, Captain Jack Sparrow. Though unfortunately missing Dead Men Tell No Tales (for obvious reasons), this LEGO recreation of Pirates of the Caribbean features adventures from all four movies up until that point. It’s made by Traveller’s Tales, the studio responsible for some of the Crash Bandicoot games, which is always a good sign!

As with Epic Mickey, LEGO Pirates has regrettably not received a modern update, though as you can see, it was released on an insane number of consoles, increasing your likelihood of being able to play this gem, as well as other Disney video games on the systems.

What are your go-to Disney video games for when you’re bored? Let us know your picks and any we missed in the comments below.

Comments Off on Bored in Self Isolation? Make These Classic Disney Video Games Your Sidequest