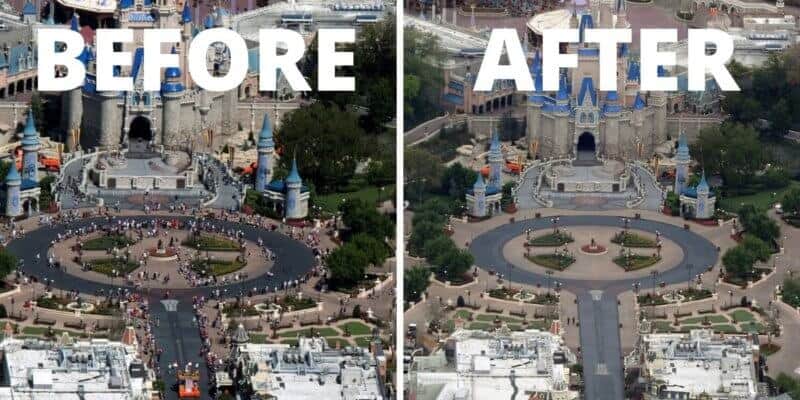 On March 12, 2020, Walt Disney World announced they would be closing the theme parks due to coronavirus outbreak concerns. As COVID-19 continued to spread worldwide, the Walt Disney World Parks made the decision to close its theme parks as safety and health concerns are number one priority.

The last day the theme parks were opened to Disney guests was on March 15, 2020. Beginning on March 16, the theme parks shut down to everyone, including both guests and Cast Members. And even though we can’t be inside the theme parks at the moment, we can still take a look at these incredible before and after photos!

Below, you will see several different photos showcasing the theme parks on the last day they were opened (March 15) compared to a completely deserted theme park once they closed their gates (March 16).

According to the NY Times, year after year, Walt Disney World hosts more than 93 million people as they come from all around the world to visit the six parks within Walt Disney World. These theme parks include the Magic Kingdom, Disney’s Hollywood Studios, Disney’s Animal Kingdom and Epcot as well as the two water parks including Blizzard Beach and Typhoon Lagoon.

One of the busiest parts of Magic Kingdom is the hub, located right in front of Cinderella’s Castle. On the left, you see the theme park on March 15 and on the right is a photo of the hub after the park closed its doors on March 16.

Above is another view of the busy Magic Kingdom hub — before and after the Walt Disney World coronavirus closure.

On March 15, there were still several people enjoying the Blizzard Beach pool while they still could. Come March 16, not a single person is seen as the parks had officially closed.

Toy Story Land is one of the busiest lands in Disney’s Hollywood Studios. These two photos show a comparison to the Disney World crowds near Slinky Dog Dash on March 15 verses March 16.

The photos above show the Mexico Pavilion, located inside EPCOT. On March 15 there were still quite a few Disney guests wandering around and enjoying the EPCOT Flower and Garden Festival, but as you can see come March 16, the theme park became a ghost town.

Be sure to stay tuned to Inside the Magic for all news on Disney Parks closures, re-openings, and coronavirus news.

Comments Off on Before and After Photos: Disney World Goes From Swarmed To Deserted In One Day