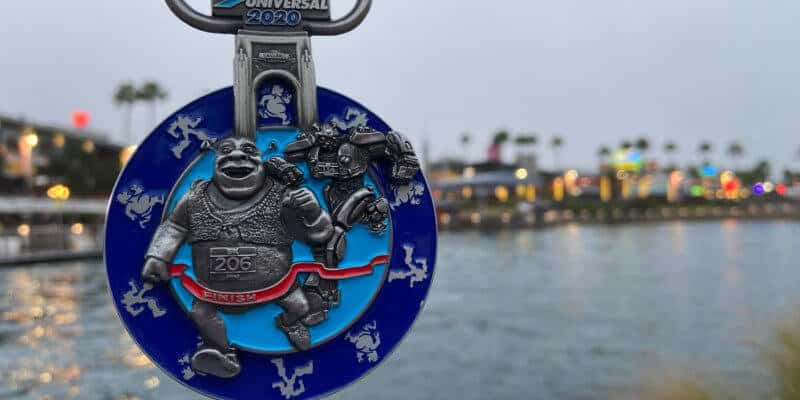 Packet pick up was made easy with confirmation emails that included a complimentary parking pass for Universal CityWalk. Signage was well placed to find the Blue Man Group theater to pick up the race bibs, bags and race shirts. New, select Running Universal merchandise was also available for sale at package pickup and on race day.

Off to a rainy start, parking was a breeze at 5:20 a.m. with a 6:15 a.m. race start. The team members made it easy to find the start line, and there were ample security lanes for those with bags.

The 5K course began near the parking garage, through the roadway behind the resorts and entered Islands of Adventure backstage nearing the mile one marker. There were great views of The Incredible Hulk Coaster lit up against the dark sky. There were also  plenty of opportunities to stop along the way for photos in Toon Lagoon and Marvel Super Hero Island, even before encountering actual character stops.

Shrek‘s Puss in Boots greeted runners as they passed by the Islands of Adventure entrance, the first character sighting along the run. The course skirted the front of this park before dropping runners off backstage. Once through Islands of Adventure, the backstage course followed underneath the train tracks of the Hogwarts Express.

Just after passing the mile 2 marker, runners entered Universal Studios in San Francisco, and just before the entrance to The Wizarding World of Harry Potter — Diagon Alley. The Knight Bus and driver welcomed runners, but for the 5K, the race did not include running into Diagon Alley.

Things were looking up as Springfield: Home of the Simpsons came into view. Photo opportunities were plentiful with character interactions and stationary statues of Simpson favorites.

A quick jog through Central Park and then it was off to Hollywood and Production Central where Mardi Gras parade characters greeted runners for photo ops, celebrating 25 years of Mardi Gras in the theme park.

Production Central featured the medal marque characters Shrek, with his saucy side-kick, Donkey, and the Transformers: Optimus Prime and Bumblebee.

Donkey was a hit with his snarky personalized remarks to each runner posing with his ogre friend. Occasionally yelling out “RUN!” to the surprise of runners passing by.

A little further toward New York and the Blues Brothers and Hashtag the Panda were ready for their photo moments as racers made the final turn toward the finish line. The race concluded with a backstage finish with medals presented to each runner and offering even more photo moments with Madagascar’s Alex the Lion and, of course, a Minion. And food boxes!

The Running Universal Epic Character Race 10K will be on Sunday, also at 6:15 a.m. and racers will have the opportunity to run through even more of both of the parks, including parts of The Wizarding World of Harry Potter — Hogsmeade and later Diagon Alley. The race also runs through Jurassic Park and Skull Island: Reign of Kong.

Runners also receive discounts to multiple venues with 15% off, just by showing the race bib. Included in that is Voodoo doughnuts, which offers yummy 5K and 10K specialty doughnuts for race weekend.

The race at SeaWorld concluded with a greeting by the legendary Jack Hanna, and a special race-day exclusive killer whale educational presentation. The second annual Furry Friends Fun Run is set to kick off in May 2020.

Avid runDisney racers will miss the massive Disney race expos, not offered for either of these races yet. Though parking for both SeaWorld and Universal was a breeze, with fewer racers present and what felt like more locals than resort guests.

Ready to sign up for a theme park race? The Disney Wine and Dine Half Marathon Weekend registration is coming up in March!

Did you run the new Orlando theme park races? Running the Inaugural 10K tomorrow? Let us know in the comments!

Comments Off on Running Universal: Universal Enters The Race Business!