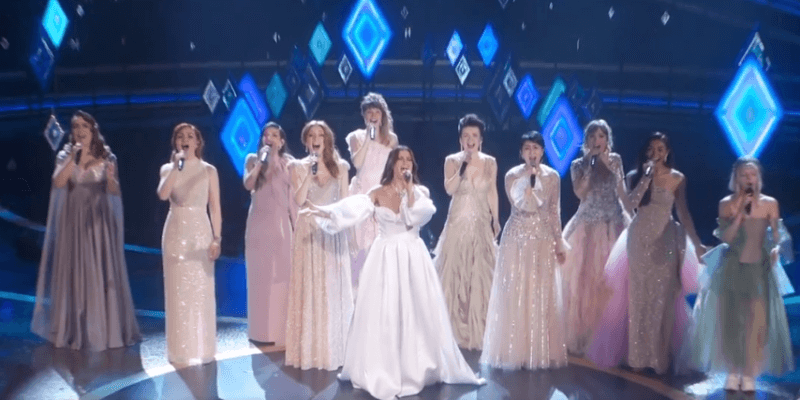 Because one Elsa is never enough! The icon and Disney queen herself Idina Menzel performed at the Oscars on Sunday evening alongside nine other Elsas for a live version of “Into the Unknown.” And it was nothing short of breathtaking.

That’s right. Nine voice actress from all over the world who are known for playing Elsa in several different languages joined the original ice queen Idina Menzel and Norwegian artist Aurora (you know, the mysterious voice calling to Elsa in Frozen 2?) onstage at the Oscars tonight. Idina Menzel and Aurora took to the stage first, performing the live version of the powerful Frozen 2 theme song we know and love. But shortly after Menzel and Aurora took to the stage among the gorgeous frozen fractals, nine other Elsas joined them.

In addition to Idina Menzel and Aurora, the following Disney queens from around the globe performed: Maria Lucia Heiberg Rosenberg who sang in Danish; Willemijn Verkaik who sang in German; Takako Matsu who sang in Japanese; Carmen Garcia Saenz who sang in Spanish; Lisa Stokke who sang in Norwegian; Kasia Laska who sang in Polish; Anna Buturlina who sang in Russian; Gisela who sang in Castilian; and Gam Wichayanee who sang in Thai.

As a Frozen fan, I was absolutely thrilled to see so many women representing Elsa in such a unique way. “Into the Unknown” is such an epic song from  Frozen 2, and even though  Toy Story 4 ended up winning Best Animated Feature, the  Frozen sequel still had its moment to shine onstage, thanks to Menzel, Aurora, and the other iconic women who joined them at the awards show.

You can watch the full  Frozen 2 Oscars performance below:

And if you can’t get enough of “Into the Unknown,” listen to the original song from the movie and watch a behind-the-scenes clp featuring the fantastic Aurora:

What was your favorite Oscars performance this year? Do you think Frozen 2 should have received more recognition this awards season? What did you think of the “Into the Unknown” performance? Let us know in the comments below!