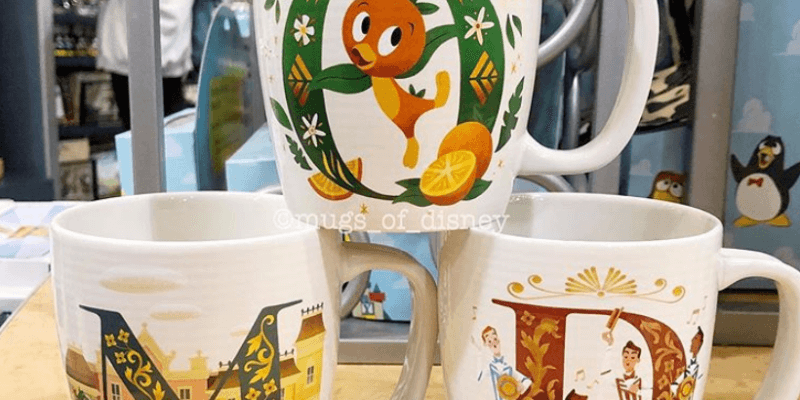 Mugs galore! Just yesterday, we let you in on the rumored new Starbucks x Star Wars “Been There” coffee mugs and now we have a collection of 26 initial mugs to share. Known as the ABCDisney collection, there’s a mug for each letter of the alphabet, each featuring a corresponding iconic Disney character or attraction.

So far, these have only been spotted at Walt Disney World. No world on whether or not they’ll be sold on ShopDisney.com or at Disneyland anytime soon, but we’ll keep you posted if they become available anywhere else.

This collection is so much fun and offers something for everyone. Literally. No matter what your name is, there’s a mug for you! The mugs have a classic Disney aesthetic that won’t ever go out of style. They would also make amazing gifts for all of your favorite people.

Here’s a closer look at the new mugs, thanks to @magicandwishes and @mugs_of_disney on Instagram!

“A” is for Adventureland.

“B” is for Big Thunder Mountain Railroad.

“C” is for Cinderella’s Castle.

“D” is for the Dapper Dans.

This Main Street U.S.A barbershop quartet has a cult-like following, but isn’t featured on a lot of merchandise, so this is a fun addition to Disney Parks shopping!

“E” is for the Enchanted Tiki Room.

Featuring Tinkerbell, this mug pays homage to Fantasyland with classic fairytale imagery, including a big top and lots of springtime flowers.

Featuring the Grim Grinning Ghosts, the collection’s “H” mug is the perfect choice for fans of the super popular Haunted Mansion ride that appears in one form or another in every Disney theme park around the world.

“J” is for the Jungle Cruise.

With both the Jungle Cruise movie and new board game releasing soon, this mug features everything we love about this classic ride imagined by Walt Disney himself.

“K” is for Kilimanjaro Safari.

This mug looks like it could have come from a turn-of-the-century cupboard with the cutest Main Street U.S.A. scene featuring a horse drawn carriage and a nostalgic color scheme.

“N” is for Finding Nemo.

The ever-popular Orange Bird has been on-the-scene more than ever since last year’s EPCOT sipper. He is rumored to be heavily featured on this year’s Flower & Garden festival merchandise as well!

“P” is for Peter Pan’s Flight.

“Q” is for the Queen of Hearts.

“R” is for the riverboat.

Although this mug specifically features Soarin’ Around the World, it is perfect for all fans of the Soarin’ ride, including those who are excited for the limited-time return of Soarin’ Over California at Disneyland Resort.

“T” is for Tomorrowland.

The only Disney princess featured in this mug collection, Ariel plays the starring role in a scene dedicated to Under the Sea.

“V” is for villains.

“W” is for EPCOT’s World Showcase.

A tribute to Pirates of the Caribbean, the “X” mug in this series features fan favorite, Red, the famous dog holding the jail cell keys, and a treasure map in the background.

We love sharing new drinkware with our coffee-loving readers. Are you happy with the featured Disney Parks icon on your ABCDisney initial mug?