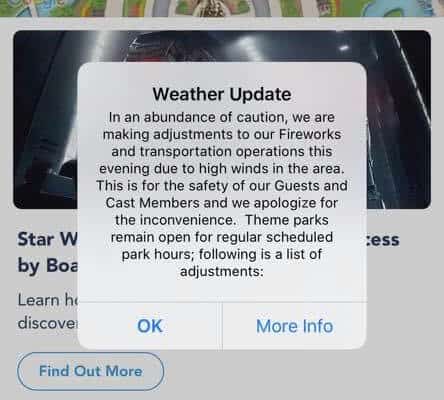 This evening Walt Disney World Resort has made some adjustments to the transportation options and nighttime entertainment offerings due to weather concerns.

The announcement first came as a notification via the official Disney World app, My Disney Experience, which warned guests that certain transportation options would be unavailable (including the Disney Skyliner) and some nighttime entertainment would be canceled. This was due to tonight’s high winds. More specific information regarding the cancelations was also posted on the Disney World website.

You can read the adjustments and cancellations to tonight’s operations and entertainment below:

Be sure to ask a Cast Member when you check into your special event or party if you have any questions regarding the event operations this evening.

Special events and parties that have been canceled:

As always, we recommend staying up-to-date with Disney World operations as best as you can while on vacation. You can do so by enabling push notifications on your cell phone so you can be notified of any changes via the My Disney Experience mobile app. We also recommend contacting Guest Services, the front desk of your resort, or any nearby Cast Member if you have any concerns during your stay.

Comments Off on BREAKING: Disney World Cancels Fireworks and Stops Skyliner Operations Due to Weather