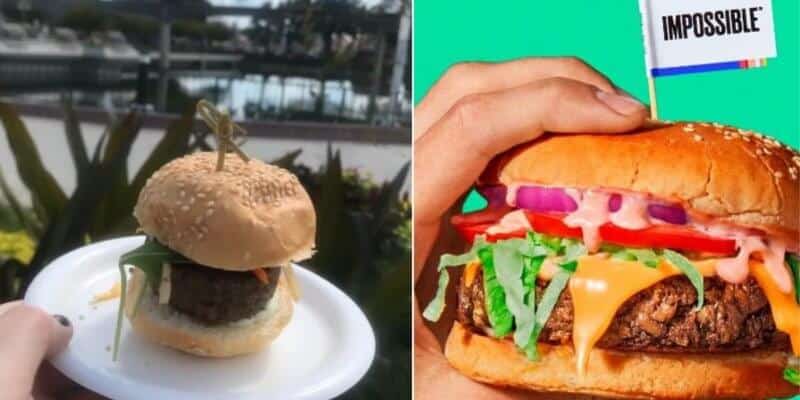 In September 2019, Disney Parks had announced they would be expanding vegan, vegetarian, and plant-based food options all across the theme parks.

This started at the Walt Disney World Resort when Disney introduced hundreds of new vegan options and plant-based food to the theme parks. Disney also introduced a brand new vegan menu icon, a green leaf, in order to make it easier for Disney guests to find the vegan options best suited for them.

Ever since this announcement in September 2019, Disney has been slowly rolling out new items on menus across all of the theme parks, water parks, and Disney Springs. Disney guests on a special diet, or even those just looking to try new items and expand their taste palate, have been thrilled with the hundreds of both sweet and savory dishes and brand new plant-based meals.

And now, it looks as though Disney is teaming up with Impossible™ to bring even more plant-based meals to the menu. In fact, Impossible™ is now the “preferred” plant-based burger of Walt Disney World Resort, Disneyland Resort and Disney Cruise Line.

In case you have never heard of or tried Impossible™ meat before, this “meat” is designed to look, taste and cook like the real thing.

“There’s a level of trust associated with Disney,” Dennis Woodside, president of Impossible™ Foods, told CNN Business. “If Disney put us on the menu, then people are more likely to try it.”

Disneyland’s Head Chef John State also spoke with CNN Business on the Impossible™ products. “It certainly has all the components we’re looking for when it comes to flavor [and] texture,” he said. “It’s a big game changer.”

Where To Find Impossible™ Products

Currently, Impossible™ products are being offered across all of the Disney Parks, at both sit down restaurants and quick service restaurants.

The Impossible™ Burger is currently offered at the following locations in Walt Disney World Resort:

There is also an Impossible™ Bunny Chow dish served at Tiffins Restaurant in Disney’s Animal Kingdom.

And if you are visiting the 2020 Epcot International Flower and Garden Festival, be sure to stop by the Trowel & Trellis Hosted by Impossible™ Foods booth for delicious options consisting of Impossible™ products, including the Impossible™ Farmhouse Meatball with Lentil Bread, Spinach, Marinated Vegetables, and Creamy Herb Dressing.

There is currently an Impossible™ Burger at Hungry Bear in Disneyland Park and at Lamplight Lounge in Disney California Adventure. In Downtown Disney, head over to either Ballast Point or Splitsville for a delicious Impossible™ burger.

Later this spring, the Impossible™ Burger will be available at Smokejumpers Grill in Disney California Adventure at Disneyland Resort.

Are you excited to see Disney team up with Impossible™? Let us know in the comments.