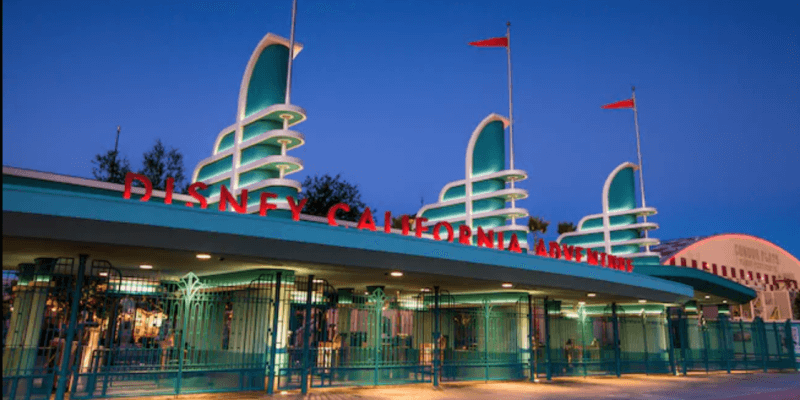 On this day 19 years ago, Disney California Adventure Park opened at the Disneyland Resort in Anaheim, California. Built on the old Disneyland parking lot, it would break all the established Disney park rules yet also become the park to most actively exemplifying what Walt wanted for his parks: to never be completed and always be in “a state of becoming.”

Let’s take a moment to look back on those 19 years and the series of changes that the park experienced in such a relatively short time:

Towards the end of the 20th Century, Disney announced plans for a second California park. Positioned next door to Disneyland Park, the new park was going to be a second, more immersive verision of EPCOT on America’s west coast. It was initially called “WESTCOT”: EPCOT’s West Coast sister park with four lands representing each major corner of the world: Asia, Africa, Europe, and the Americas.

In Episode 4 of the Disney+ Documentary, The Imagineering Story, it is revealed that the hotels would be integrated into the parks allowing guests to practically live their entire stay within the park. But plans changed, as they often do, to give us Disney California Adventure Park.

Disney California Adventure was intended to be exactly as the name suggests: an adventure through all things Californian: the chaos of Hollywood, the natural beauty of the mountains and vast landscapes, and the fun of Southern California piers. But the park was small, broke a lot of Disney’s design rules, including the two most important. There was no sense of escape. Guests can see the outside world while in the park. And there was no central hub.

Disney California Adventure opened, and it was a flop. But it wasn’t just the design changes. Disneyland guests were mostly locals. They weren’t going to trade a day of escape in Disneyland for a day in an amusement park that knocked off all the things they live with on a daily basis. The quality and level of comfort of the park also didn’t match that of its older sister across the way. Something had to be done.

Disney Tradition and IPs to the rescue!

At the command of Disney’s CEO Bob Iger, Imagineers went to work revamping the new park retheming and replacing several of the attractions six years after the park’s official opening. One of the first completed projects was redesigning the entryway. Creating a much more open, friendly gateway, Imagineers created Buena Vista Street a which immediately transported guests a la Main Street, U.S.A. to the hay day of Los Angeles in which Walt Disney began his career. Main aspects of that area include the Carthay Circle Restaurant and Longue–the Carthay Circle Theater was where Snow White premiered–and the Red Car Trolley Line.

Throughout the late 2000s and early 2010s, more Disney characters were introduced to the park. New rides such as Toy Story Midway Mania were designed and installed. The addition of Cars Land and its buttes acted as a berm to help create a deeper level of immersion and a sense of separation from the outside world. Mickey’s Fun Wheel became a central landmark. Guests also saw the addition of the nighttime fountain show: World of Color. But out of all the Disney IPs added to the park, those from Pixar have the biggest representation.

Disney California Adventure Park has become, in many ways, the closest Disney has come to a full Pixar Park. Beginning with a Bug’s Land, which is no longer there, Disney California Adventure added Cars Land, and most recently, Paradise Pier became Pixar Pier. Most prominently, the roller coaster, California Screamin’ took on an Incredibles theme as The Incredi-Coaster. Mickey’s Fun Wheel is also now called the Pixar Pal-A-Round. No other Disney park offers the same concentration of Pixar-themed attractions.

“What’s left of the original park?”

While several of the original rides are still in operation under a different theme, the only section that remained relatively untouched since the park’s opening was Grizzly Peak. Representing the wild, natural wonder of California, Grizzly Peak is the home of the original Soarin’ Over California attraction, as well as Grizzly River Run.

The “WESTCOT” Side of Disney’s California Adventure

While it never took on the name WESTCOT, Disney’s California Adventure still delivers on that original vision in three distinct ways with growing intensity: The California Food and Wine Festival, as well as Dia de Los Muertos and Lunar New Year celebrations.

The California Food and Wine Festival

A callback to EPCOT’s International Food and Wine Festival, the California Food and Wine Festival celebrates the incredibly diverse cuisines found in one of the biggest states of the Union from San Diego to Sacramento. It operates similarly to EPCOT’s festival. It offers a collection of kiosks offering dishes from different regions as well as interactive cooking shows, classes, and tastings. But it operates on a much smaller scale.

A homage to California’s far-east influence and immigration history as well as a recognition to its Pan-Asian population, Disney’s California Adventure Park hosts its own celebration of the Lunar New Year with each zodiac being assigned a Disney character. For the year of the dog, it was Pluto and Goofy. For the year of the pig, it was Hamm from Toy Story. Now, for the year of the rat-er-“mouse,” it’s Mickey and Minnie. The celebration is carried out with the highest respect for the Chinese and other Sino-centric cultures, and the utmost legitimacy.

But, according to Disneyland’s website, the 2020 Dia de Los Muertos celebrations will be held at Frontierland inside Disneyland Park.

While it is perhaps not to the extent as Imagineers originally hoped, Disney’s luxurious resort, the Grand Californian hotel, practically sits inside the Disney’s California Adventure park. Built right next to Grizzly Peak, the hotel is themed to match the log cabins one would see up in the mountains. With the proximity to rival a ski-in-ski-out chalet in matters of accessibility, the Grand Californian hotel offers an exclusive gateway to its guests. And the theming of the hotel continues to enforce the romantic idea that you are still on a California adventure. Certain rooms also offer in-park views that provide perfect private viewing areas for “World of Color.”

What’s Next for Disney California Adventure?

Through the fortitude of Disney’s Imagineers, Disney California Adventure Park has evolved into a groundbreaking, immersive experience. Now, it looks to take on a whole new superhero angle.

Marvel’s Avengers Campus is set to debut this summer inside Disney’s California Adventure park. Using the prison tower of Guardians of the Galaxy: Mission Breakout as a book-end, this themed-land promises to be one of Disney’s most immersive experiences yet, bringing guests directly into a real-world section of the Marvel Cinematic Universe. “Phase 1” will open with a Spider-Man attraction with no height requirement, a Dr. Strange Show, and a restaurant based off Ant-Man and the Wasp. Guests walking around the area will see a Spider-Man “stuntronic” jumping from rooftop to rooftop. “Phase 2” will include an all-new E-ticket attraction, the likes of which has never been seen before.

Are you planning your next trip to Disney California Adventure? If so, our friends at Academy Travel are standing by to help. Backed with years of experience and award-winning customer service, Academy’s travel agents know what it takes to help you make this trip to the Disneyland Resort, your most magical yet! Contact them today to get your free no-obligation quote.

Have you had a chance to visit Disney California Adventure? Where does it rank on your personal list of “best Disney Parks”? Are you upset with any of the changes the Imagineers have made over the years? Let us know in the comments!