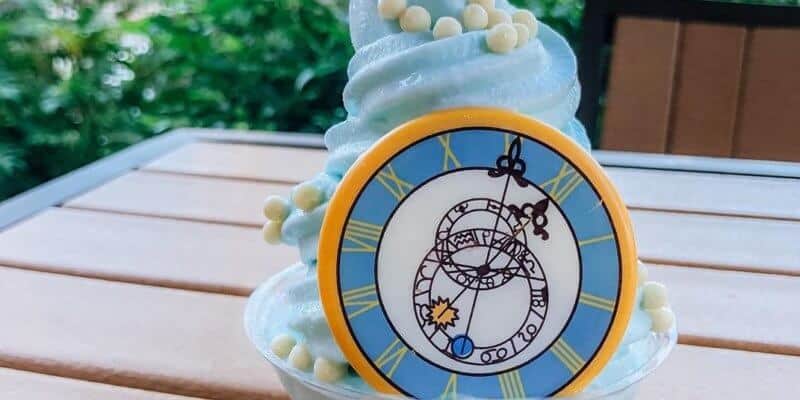 This year marks the 70th anniversary of Disney’s Cinderella and Walt Disney World is celebrating with a new Dole Whip treat that’s almost too pretty to eat.

The new Cinderella Whip is the first of the iconic soft-serve treat to be blue–just like the ball gown Cinderella wears when she meets the Prince.

The vanilla-flavored treat is topped with white crispy pearls and an intricate clock that’s about to strike midnight. The best part is that the clock is made of white chocolate.

You can find the new frozen treat at Pineapple Lanai at Disney’s Polynesian Village Resort, but it is a limited-time offering, meaning that if you wait too long to try one, “the spell will be broken, and everything will be as it was before.” Well, you get the idea.

Pineapple Lanai at Disney’s Polynesian Village Resort is one of the many places at Disney World that sells the iconic Dole Whip treat. You can get it in Pineapple, Vanilla or Swirl flavors. Choose to have yours as a float with Dole Whip Pineapple juice. Or try the always refreshing Te Fiti Cone at Pineapple Lanai which features a lime soft-serve ice cream garnished with an orchid. (Don’t forget you can eat the orchid! That’s right–it’s edible!)

The 70th anniversary of the beloved Disney classic Cinderella is definitely cause for celebration. Seventy years ago, Disney’s story of a young girl named Cinderella made its way onto the big screen and into our hearts. Cinderella must face the trials of living with her evil stepmother and two evil stepsisters before finally finding her prince and living her happily ever after.

The new Cinderella Dole Whip treat at Disney’s Polynesian Village Resort is sure to give you a happy ever after too, but don’t miss it. Remember, at the stroke of midnight . . . well, you know the rest.

Book a trip to Walt Disney World with Academy Travel to try all the delicious treats on Disney property!

Which Dole Whip is your favorite? Let us know in the comments below!