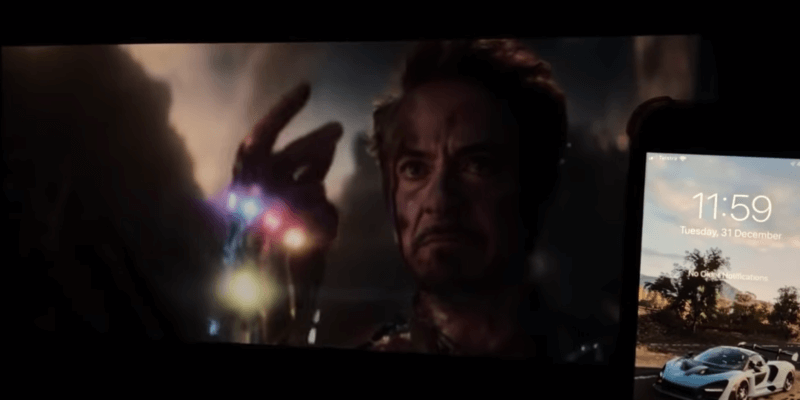 The new year is officially in full swing as we have said goodbye to 2019 and gave a warm welcome to 2020. But there is one Marvel fan out there who decided to end 2019 in the most perfect way possible.

YouTuber TC Sweaty Ace shared a video of himself watching Avengers: Endgame while waiting for the clock to strike midnight. Of course, the most famous scene of that record-breaking film is when Tony Stark tricks Thanos and snaps his fingers himself, right after saying “I am Iron Man“.

YouTuber TC Sweaty Ace revealed in a Reddit post that he began watching Avengers: Endgame “around 9:15” in order for this perfectly planned moment to happen.

Watching the video, you will see Tony Stark snap his fingers just as the clock strikes midnight and the video quickly pans to an eruption of fireworks. Needless to say, I got chills.

This iconic scene of Tony Stark saying “I am Iron Man” has made its rounds on the Internet for months, even after the film hit theaters. In fact, it has become a very frequent topic of conversation when anyone brings up Avengers: Endgame, but the funny thing is that this iconic line was not always planned this way.

“When we were putting together the end of the movie, when we shot Tony’s last moment in the first round, we shot a bunch of different options. Robert had different ideas… We give him space to do that,” Jeff Ford, an editor for Avengers: Endgame, explained in an interview. “Joe and Anthony are great about improv. We shot a run of different performances for that last moment. Some of them were crazy. Some of them we would never have used.”

“In that version, Thanos didn’t say anything either. He had the gauntlet. He looked at him like, ‘I got you.’ Snapped. Looked. Couldn’t believe it. Turned to Tony. Tony raised his hand and snapped. It was beautiful. It worked really, really well,” Ford said.

“But what we found, though, was Thanos needed an arc in Endgame. That arc was his sense of inevitability. The story we’d been telling was that Thanos’ pitch in that movie is ‘no matter how many times you try and stop me, you can travel in time, you can do all these things, you’re never going to win.’ It’s a sense of destiny, of ‘I will always be the one who wins.’ They’re trying to undo destiny. They’re going against what happened. For the movie to have thematic coherence, the end of the movie needed to be Thanos saying, ‘I told you. You cannot win,’ and for Tony to say, ‘But we can’.”

Regardless of how the scene came to be, it is now one of the most iconic lines in the history of Marvel films. And it was the perfect way to ring in the New Year.

How did you ring in the New Year? Let us know in the comments.