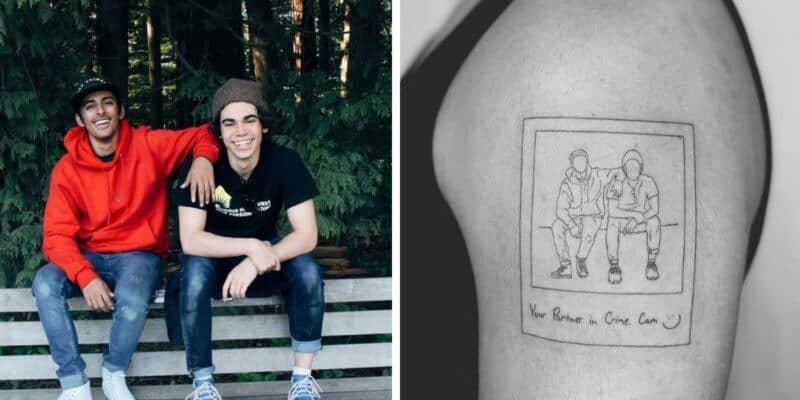 Disney Channel star Karan Brar is remembering the late Descendants actor, Cameron Boyce, with a new tattoo in honor of their friendship.

Karan took to Instagram this past weekend, January 12, to post a photo of his new tattoo, which is on his arm. He wrote: “a photo of Cam & I the day before his 19th birthday and part of a letter he wrote to me on my 15th birthday. HUGE thank you to @unotattoonyc for doing such an amazing job – you are a legend my friend”.

As you can see, the tattoo that Karan got is almost an exact recreation of the polaroid photo of the duo together, except they are in silhouette form. The perfect touch was added to Cameron’s face — his famous freckles.

Underneath the polaroid picture, the words “Your Partner in Crime, Cam” are written alongside a smiley face, which is in Cameron’s own handwriting. These words were written at the end of the letter that Cameron sent Karan when Karan turned 15.

Friends of both Cameron and Karan commented on Karan’s Instagram post admiring and praising the tattoo. Dove Cameron even wrote “i felt this in my whole body” and Sabrina Carpenter and Debby Ryan both posted heart emojis in the comments section.

Ever since Cameron passed away, Karan had used his social media platforms in order to raise awareness about the Cameron Boyce Foundation, which began to end gun violence, provide people with clean water and increase epilepsy awareness.

a photo of Cam & I the day before his 19th birthday and part of a letter he wrote to me on my 15th birthday. HUGE thank you to @unotattoonyc for doing such an amazing job- you are a legend my friend ❤️

Cameron Boyce passed away earlier this year from epilepsy, just before Descendants 3 was released. Boyce was only 20 years young.

In a statement to ABC News, Boyce’s parents wrote “It is with a profoundly heavy heart that we report that this morning we lost Cameron. He passed away in his sleep due to a seizure which was a result of an ongoing medical condition for which he was being treated.”

What do you think of Karan Brar’s new tattoo in honor of Cameron Boyce? Let us know in the comments.