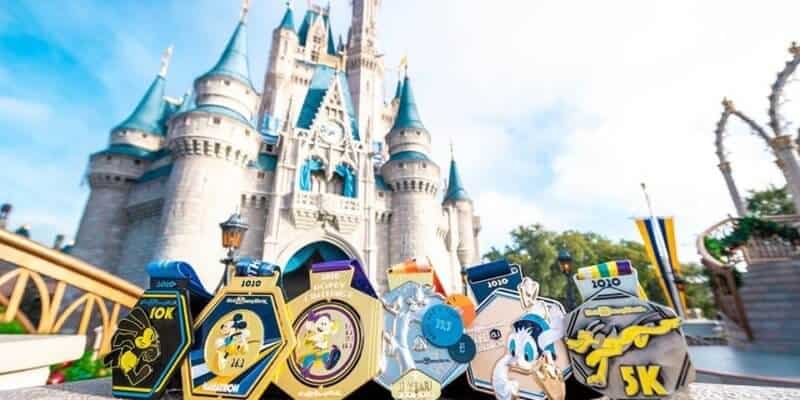 At 11:32 a.m. EST, race officials announced through the runner tracking text messaging that “given today’s rising temperatures and the length of the race, for our runners’ safety, we are modifying the course for the remainder of the event.”

With a new marathon start time of 5 a.m., runners six hours into their race and past the 20-mile mark were able to run the entirely new, originally planned course through Disney’s Blizzard Beach. The course was ultimately shortened by 2 miles, diverting runners past the water park entrance and on to Disney’s Hollywood Studios, as the record Orlando temperatures were climbing to a high of 84 degrees.

The shortened course caused many runners to go to greater lengths to gain the true mileage of the marathon, as all of the shirts and medals are marked 26.2.

Many of these were the Dopey Challenge runners, seeking to reach a true 48.6 miles, as noted on the medals, before accepting their challenge medals.

And the winner is…

Much earlier in the morning, Nick Hilton, of Flagstaff, Arizona, crossed the finish line as the Walt Disney World Marathon champion with a time of 2:22:19. He’d won before two years ago as he broke the four-time streak of former champion Fredison Costa, who was present but unable to compete this year.

Hilton had this to say to the Orlando Sentinel:

“You get chills down your spine when you kind of know you’re coming into the finish,” Hilton said. “It’s just such an emotional moment that you get really excited. It feels just as special this time as the last, if not more so.”

The female champion, Giovanna Martins, of Salto, Brazil, won for the fourth time in a row with a time of 2:54:19. Her fifth win overall.

Spectators were out in full force this morning. Whether hanging out at the ChEAR Squad area at the finish line or following their runners from the Epcot start. Many took the monorail to Magic Kingdom Park, where the park was open without the need for a theme park ticket to enter and watch friends and loved ones race down Main Street U.S.A. and pass through Cinderella Castle as they continue on their way.

I was able to meet up with several friends as they came through the backstage area and onto Main Street. It was an emotional moment connecting with my friend Courtney, we’d run the 25th-anniversary marathon together, and she was in the midst of her first Dopey Challenge. Another sweet surprise to also see Shelby, whom Courtney and I had met at our marathon starting corral two years ago, and she stayed with us those 26.2 miles. Today, Shelby was also running the Dopey Challenge.

Leaving Magic Kingdom Park, I grabbed a monorail to Disney’s Polynesian Village Resort. I was able to see my friends again around the 12-mile mark in the race, as they passed by the main entrance of the Shades of Green Resort. That is where we’d part ways with them until they reached Epcot. I also got to see a couple of other friends running as well, and thankfully around the same pace.

As I met up with several friends at the Grand Floridian, who were also following runners, we saw the infamous “balloon ladies” pass by.

For those who have not yet had the chance to run a runDisney race, at the end of each race there are ladies walking the required 16 minute pace from the last race corral. Runners must stay ahead of the “balloon ladies” or risk being picked up by the “parade bus” and driven to the finish line with “did not finish” status.

And just beyond the balloon ladies, we saw a few runners who were not going to be able to finish their race. It was sad to see their race come to an end and everyone around them cheered for them — they’d made it 12 miles. Several after three days of running previous races.

Before leaving the area, I got a quick picture of Donald and Daisy Duck as they were wrapping their chEARing duties along Floridian Way. One of the best things about runDisney races is finding out which characters are cheering you on and which rare characters make their way out to the racecourse to say hello. It is always a surprise!

This year did not disappoint with the Fab Five joined along the course by all kinds of Disney friends including Jack Sparrow, Sam Eagle, Jessie, Vanellope and so many more. And Dopey, of course!

The Kindness of Spectators

At Epcot, it was awesome people watching as runners entered at England and exited at Norway. One couple raced past the crowd at the turn to exit backstage and race to the finish. Everyone turned to look at them wondering what they were doing leaving the course. As they ran past the spectators, they called out to a Disney Cast Member with “we’ll be right back, we have to get our margarita!”

Another woman was seen handing out free margaritas to runners. I told her how kind that was and she responded with, “well, I can’t run, so this is what I do, I hand out margaritas!” Finishing strong with an Epcot beer or margarita in hand is another distinctive find at runDisney races.

Making my way to the finish line to see my friend Courtney complete her Dopey Challenge, which includes the 5K, the 10K, the Half Marathon, and the 15th anniversary Goofy Challenge of the Half and the Full Marathons, there was excitement in the air as music was pumping and family and friends were expectantly watching for their person and then moving out of the way for the next spectator who needed to set up for their person. An unspoken spectator courtesy.

One of the best things about Disney races are the people cheering and the true kindness of strangers. Watching these impressive people achieve such a remarkable accomplishment is inspiring. And the costumes, definitely the costumes.

And cheese. If you’re a runDisney racer and you were here for the last Wine & Dine race, you know what I’m talking about. (#CheeseGate2019) Your voice was heard and the cheese is back. Thank you, runDisney!

Are you seeing all of the coverage and wishing you were running? FOMO is real.

It’s not too late to sign up for a runDisney race in 2020. Check out our previous article on running Disney in 2020 for open races and set your calendar for race registration day, March 10, 2020, for the Disney Wine & Dine Half Marathon Weekend this Nov. 5-8.

Want to run sooner? There are still sign-ups available for the Star Wars Rival Run weekend in April. This is the way.

If you’re not sure, check out the training programs on the runDisney site and let your racing journey begin.

Are you running a runDisney race this year? Let us know in the comments. See you real soon at the Disney Princess Half Marathon Weekend!