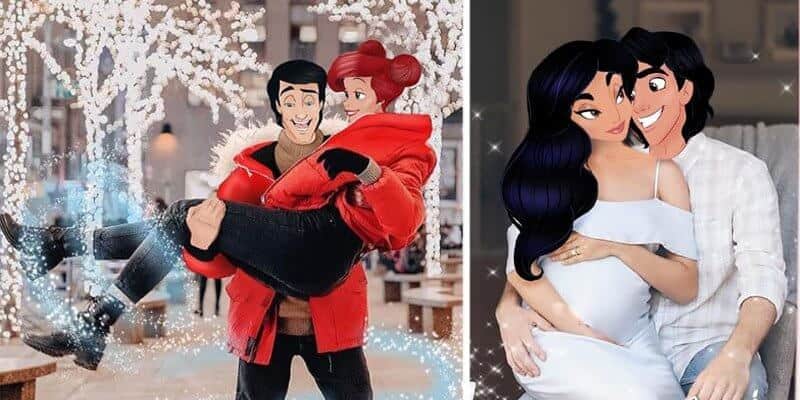 Many of the most beloved Disney classics of all time tell the stories of princesses and their long-sought-after beaus. Each film is beautifully animated and shares the story of how the couple met, fell in love, and began their happily ever afters.

But have you ever wondered what Disney Royals do with their downtime? Do they stay in their castles, dressed to the nines, waiting for the next big event in their ever afters? Do they attend balls their fairy tales don’t tell us about? Or are they perhaps a bit more down to earth than that? Russian artist Guni apparently “caught up” with the royals from the House of Mouse and photographed them living their happily ever afters–minus the ball gowns and Fairy Godmothers. Here are Guni’s reimagined Disney Princesses as we would know them today.

Years after Ariel earned her human legs and Prince Eric defeated Ursula, this mermaid and her man are still madly in love. They love long walks in the snow and romantic getaways, but they also see the value in time spent together just lounging around at home.

Cinderella learned his lesson about bowing down to stepsisters and about wearing shoes made of glass: neither was a good idea, so she has put those things behind her. After all, she has her prince, and she couldn’t be happier. She wondered if the dream that she wished would ever come true, and truth be told, somedays, she thought she’d probably spend her whole life as a servant. But instead, she lives a carefree life with her charming prince, and they don’t waste one moment of their time together. Whether it’s going for a walk in the park or writing music together, Cinderella and her Prince enjoy spending all their time with each other.

Maleficent has long been defeated thanks to the heroic efforts of Prince Phillip. And with evil villainesses-turned-dragons no longer a threat, Princess Aurora is finall able to begin living her life. She and Prince Phillip enjoy spending time together, even if they’re just eating pizza. They even have a son now, and he looks just like his Daddy. The princess and her beau still find time to get away every now and then, and they make sure to spend time with King Stefan and the Queen. She grew up far from them and she never wants to go back to the way things were ever again.

If ever two people were in love, it’s Princess Jasmine and her prince. The two of them are almost giddy with adoration and affection for each other. Their royal wedding made the local newspapers, and their latest news will likely do the same. Aladdin and Jasmine are expecting and will welcome their new baby very soon!

Bookworm Belle and her prince like to color outside the lines. Why else would they have a lavish, formal wedding and then race to McDonald’s immediately afterward? We don’t know, but that’s exactly what they did, and the picture below is proof. We hear that Belle’s father Maurice loves being a grandfather; that’s right; the couple now have a daughter, and she looks just like her mother. But no matter how busy they get, Prince Adam and Belle always make time to invest in their relationship. And from the looks of these photos, Belle can’t pass up an Instagram-worthy photo op.

The best of friends

All of the Disney Royals–though very busy with their duties as royalty in their respective lands–always make time for their friends. They have attended each others’ weddings and many of the princesses have been bridesmaids as part of their friends’ nuptials. No matter what experiences they enjoy or where life takes them, this big group of friends has stuck together through it all. Think of it as a communal “happily ever after.”

Which of the Disney Princess stories is your favorite and why? Let us know in the comments section below.