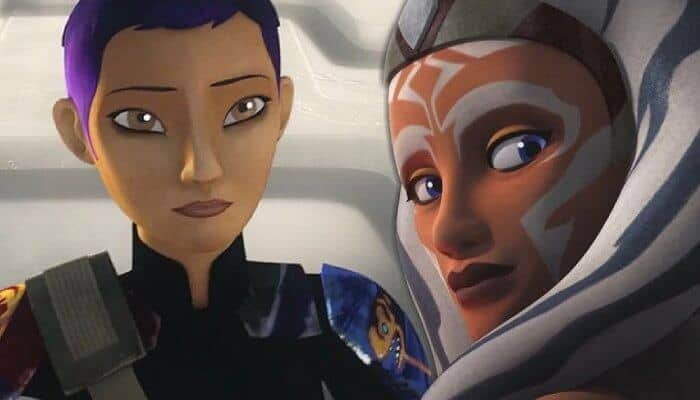 Calling all members of the Rebel Alliance! It’s time to get excited because one of the most beloved series —  Star Wars Rebels — is reportedly getting a spin-off.

According to the dedicated Disney+ fan and news site What’s On Disney Plus and the YouTube channel Kessel Run Transmissions, a Star Wars Rebels spinoff series is rumored to be in the works for Disney’s new streaming service. This new animated series will feature a hero of the Clone Wars Ahsoka Tano and Mandalorian warrior Sabine Wren, and it will be a spinoff from The Clone Wars and Rebels, two popular Star Wars animated TV shows. The rumor suggests that longtime Star Wars creative Dave Filoni is attached to the spinoff, although he might not directly oversee the new series since he’s already currently working on multiple other Star Wars projects.

Of course, nothing is confirmed, but Filoni did tease some artwork of Ahsoka and Sabine a while back. Even though he said it wasn’t an announcement of a new show, it did have us wondering:

If you’re a Star Wars fan but you haven’t watched the animated series so you’re not familiar with these two characters, let us catch you up. As we mentioned, Ahsoka Tano is the hero of the Clone Wars, but she started off as Anakin Skywalker’s Padawan learner. However, although she originally sought to become a Jedi, she was ultimately led down a different path (we won’t spoil it for you — you’ve still got to watch her in the series!). Sabine is a Mandalorian warrior and, like Ahsoka, one of our favorite female characters in the Star Wars universe. She was one of the first rebels against the Empire — but you’ll learn all about her if you watch the Star Wars series.

Since Disney+ launched, it has been the exclusive home to a variety of Star Wars content. But who would Star Wars fans be if they didn’t want more? Already, we know that some pretty amazing Star Wars projects are in the world for Disney+, including a second season of The Mandalorian, a Cassian Andor series (remember him from Rogue One?), a series that follows Ewan McGregor as Obi-Wan Kenobi, and a brand-new season of The Clone Wars.

Reportedly, the new Clone Wars spinoff following Ahsoka and Sabine will debut this fall, which seems pretty soon considering Disney and Lucasfilm haven’t formally announced it yet. We’ll keep you posted when we know more information, but for now, we’ll be binge-watching the original Clone Wars on Disney+.

Do you hope Ahsoka and Sabine get their own animated Star Wars series on Disney+? Let us know in the comments!